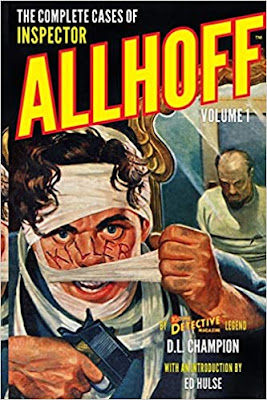 Between 1938 and 1945, pulp author D.L. Champion (1903-1968) wrote 30 stories starring a psychopath crippled detective named Inspector Allhoff. The stories are basically a dark and twisted variation on Nero Wolfe or Sherlock Holmes stories as well as a precursor to paraplegic TV detective Ironsides.

Altus Press/Steeger Books has compiled several of the stories in two separate volumes with vivid cover art from the original Dime Detective Magazine stories. I bought a copy of Volume 1, and it contains 10 Allhoff novellas - each story about 40 pages long with an introduction by pulp historian Ed Hulse.

Here’s the setup for this twisted series:

Three years before the first installment, Inspector Allhoff was a top Manhattan cop - the best mind in the department. During a raid on a mob hideout, Allhoff was shot and crippled because of a screw-up by a rookie patrolman named Battersly. The young officer is forced to live with the fact that he is responsible for Allhoff being rendered a double-amputee.

Stay with me because it gets better:

The NYPD doesn’t want to lose Allhoff’s investigative talents, so they quietly keep him on the payroll and set him up in a decaying apartment near the police station. They assign Allhoff a partner to run down the leads devised by the crippled genius to solve difficult crimes and mysteries. The partner? Former patrolman Battersly, the man responsive for Allhoff’s crippled condition. It would be an understatement to say that the relationship between the two men is strained. The psychologically-damaged Allhoff is sadistic and cruel to the young officer, and Battersly is wracked with guilt for the mistake he made years earlier. Despite this dysfunctional pairing, impossible crimes get solved.

The stories are narrated by an older cop named Simmonds who also assists Allhoff with paperwork and bears witness to the tortuous cruelty directed at Battersly. Imagine if Sherlock Holmes was an embittered legless lunatic who solved crimes while psychologically torturing Watson at every opportunity, and you get the idea behind the Allhoff series.

In the first story “Three Men and A Half” (1938), the setup for the series is laid out nicely by Simmonds for the reader. A visiting homicide detective from Chicago seeks Allhoff’s help with a vexing murder case disguised as a suicide. Allhoff dispatches Simmonds and Battersly to gather evidence from the crime scene and bring it to Allhoff’s apartment. Some impressive deduction combined with a clever bluff smokes out the killer when all the suspects are gathered to hear Allhoff’s accusing monologue. It’s a good Sherlock Holmes-styled mystery but not action-packed at all.

By necessity, Allhoff is essentially an armchair detective, so the rare pulpy violence is left up to Battersly and Simmonds who manage the fieldwork. This works well because D.L. Champion was an excellent writer - way better than must of his pulp cohorts. The mysteries he devised for the Allhoff stories are clever and well thought-out.

“Suicide in Blue” from 1940 was the tenth published Allhoff mystery and the final story in this first collection of cases. There has been a spate of murders lately among people who previously received extortion letters. The police commissioner requests Allhoff’s help in uncovering the truth about these mysterious killings. The solution to this one was pretty darn smart.

If you can stomach an unpleasant wretch of a main character, you’ll probably really enjoy the Allhoff stories. They’re not action stories, but the deduction-based mysteries are smart and well-written. Once again, the reprint publisher did a great job resurrecting a lost character series, and the world is a better place for it.