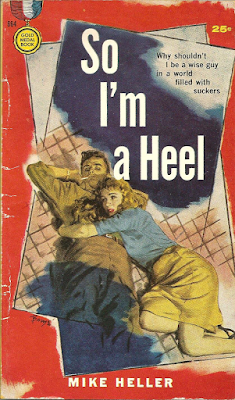 Journalist, soldier, author, and baseball fanatic Arnold Hano wrote a Fawcett Gold Medal paperback titled So I’m a Heel that was published in 1957 under the pseudonym Mike Heller. The short crime novel has been compiled into a three-book volume of Hano’s work called 3 Steps to Hell published by Stark House.

Our narrator is a Southern California tow-truck driver named Ed Hawkins who suffered an injury to during WW2 resulting in an artificial plastic jaw holding his contorted face together. Somehow he landed a nice wife and a beautiful son despite his disfigured face. When Hawkins learns that a local big-shot lawyer with political connections was caught a few towns away molesting a high-schooler whose parents opted not to press charges, his mind turns to blackmail.

While contemplating the shakedown, Hawkins spends time rationalizing the morality of his actions. In doing so, he breaks down the fourth wall and challenges the reader’s own assumptions about right and wrong. It’s an interesting literary gambit employed by Hano, who’s an excellent conversational writer with a distinct literary voice.

As you might expect, Hawkins’ scheme meets some serious bumps in the road. The blackmail story was compelling, and I couldn’t figure out where it was going. Suffice to say, there’s a hot-to-trot dame involved and plenty of rather dark twists along the way. Be forewarned: The final act got rather weird and uncomfortable. I won’t give it away here, but I’m still trying to decide if the conclusion worked for me or not. There was also a local politics subplot that was hard to follow, but didn’t take up much space.

Overall, I enjoyed So, I’m a Heel. Hano is a solid author, and you’ll never be bored with his plotting. Despite some unusual turns, he wrote an effective story with a memorable lead character that’s certainly worth your time.