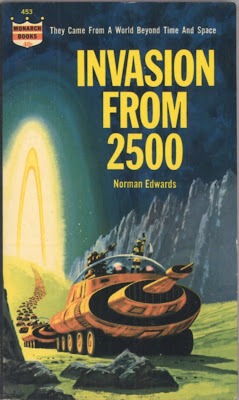 Norman Edwards was a pseudonym utilized by science-fiction authors Ted White and Terry Carr for their collaboration on a 125-page paperback titled Invasion from 2500 released in August 1964 by Monarch Books. The novel is also available as a $4 ebook under the authors’ own names.

Invasion from 2500 takes place in contemporary 1964 America. While Korean War veteran Jack Eskridge is driving through the desolate rolling hills of South Dakota, the night sky illuminates with a flash. Jack witnesses the formation of an illuminated arch from which armored men and war machines begin emerging. The author’s description matches the paperback’s cover art by illustrator Ralph Brillhart perfectly. A good cover brings the author’s vision to life, and anything else is just generic packaging - a wrapper thrown on a product with no thought or care. In this case, the artist clearly read the book and understood his role.

It doesn’t take long - only a couple pages - before this invading force of high-tech soldiers wearing gas masks functionally take over large U.S. cities while most Americans are cowering in their homes. The invaders’ airships spray a gas on populations to overcome resistance while Jack and a hitchhiker attempt to outrun the invaders.

The reality concerning the identity of the invading force is pretty much given away in the paperback’s title - a tactical mistake since their origin was a big second-half revelation. The oppressors from the future have some insidious plans for the good people of 1964 that I won’t give away here. Fortunately, an underground resistance similar to what arose in France during WW2 forms to oppose the invaders. If you’re into cool time-travel paradoxes, there’s more than a few in this short paperback.

Overall, Invaders from 2500 is a simple, but very exciting, work of vintage fun. It’s a great gateway drug into the world of science fiction for readers approaching the genre from a background of action-adventure pulp fiction. With breakneck action from start to finish merged with cool time travel ideas, this old book is a real winner.