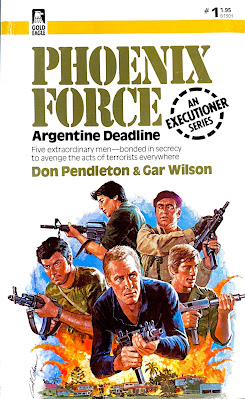 In 1981, Don Pendleton's The Executioner was redefined by publisher Gold Eagle as a new series of international espionage thrillers. Mack Bolan's vigilante characteristics remained, but with the 39th installment, The New War, the series shifted to Bolan working as a government operative named John Phoenix. This seismic change in the series led to Gold Eagle introducing two new series in 1982 – Able Team and Phoenix Force. I tackled the debut Able Team book recently and wanted to give the same treatment to Phoenix Force. This time, I was hoping for a much more enjoyable reading experience.

David McCarter – British commando expert with a background as an SAS officer.

Rafael Encizo – Cuban-American expert with a penchant for underwater warfare.

The introductions to the characters is summarized in the narrative as a round-table first-time meeting with Bolan to discuss the team, long-term goals and the group's first mission. These five commandos are tasked with locating and liberating seven members of a joint peace-keeping think-tank. These men, and one woman, were invited to romantic Argentina by the country's over-taxed government. But instead of a warm welcome and an open exchange of ideas, the scholars are abducted by the terrorist group Ejercito Revolucionario del Pueblo (ERP) and taken into captivity as bargaining chips in a robust ransom scheme.

What I really enjoyed about this series debut is the central idea that Phoenix Force is fully backed by the government and utilizes a number of weapons caches and military offshoots to accomplish their mission (or die trying). The book's main stars are McCarter and Manning, a fighting duo who does much of the heavy lifting throughout the narrative. Nearly all of the characters star in solo missions that incur heavy firefights in the quest for information. These solo missions are really effective in displaying each character's strengths combined with their background.

While I felt that the villains were a little weak (but much stronger than something like S-Com), the narrative and plot-points were a real pleasure to consume. Argentine Deadline is a far more superior series debut than Able Team's Tower of Terror, which was released in the same month. I'm sure I will have plenty to like and dislike about both series titles as I navigate further into the expansive Bolan universe. But with a firm opening foothold, Argentine Deadline is a solid step in the right direction.