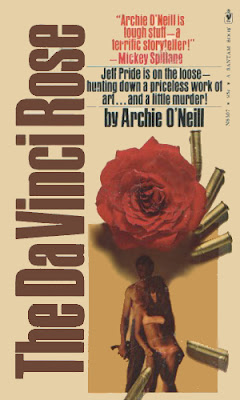 Jim Henaghan (1919-1984) was a well-known columnist for The Hollywood Reporter with a reputation for bluntness and candor that often rustled the feathers of the showbiz industry’s establishment. He also worked as a rewrite man for Paramount and was an executive for John Wayne’s production company. Under the pseudonym of Archie O’Neill, he authored a five-book adventure series starring Jeff Pride that earned the admiration of Mickey Spillane. The first novel in the series was 1973’s The DaVinci Rose.

Jeff Pride is a former international private investigator turned travel agent (back when that was a thing) who bounces around the world with his sexy Asian-American secretary-sidekick Cherry. Cherry wants to get romantic with Jeff, but he thinks that would be unwise for a number of valid reasons that I’ll let Jeff explain to you when you read the book. Cherry’s flirtation with her boss is a running gag in the novel and presumably the series. In any case, she’s a perfect sidekick character for a novel like this.

As the paperback opens, Jeff is in his Israeli hotel room when he awakens to find the corpse of a guy in a suit lying on the ground next to his bed. An altercation in the room brings Israeli police into the picture. The cops take Jeff’s passport pending further investigation. For his part, Jeff figures that the situation arose from his heroic past rather than his benign current job as a travel consultant.

The killing, violence and skullduggery all concerns a missing art piece - a ceramic rose hand-crafted by Leonardo da Vinci. Dangerous people think that the dead guy in the hotel delivered it to Jeff who actually knows nothing about the damn thing. One thing leads to another and Jeff agrees to get back into the investigation game and find the ceramic rose.

I really enjoyed The DaVinci Rose primarily because Jeff Pride is such a great narrator. The action took the character all over Israel balancing a treasure hunt adventure with a hardboiled mystery. I’m looking forward to reading the next installment. Recommended.