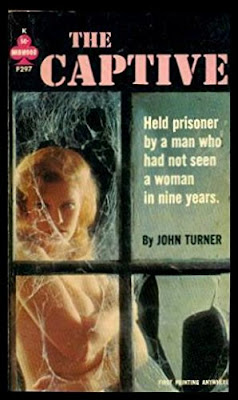 The paperback doesn’t waste any time getting into the action. It’s Friday evening in Suburban Boston, and Josephine is abducted by a strange man with a gun in a restaurant parking lot. He forces himself into her car and tells her to drive home. We quickly learn that his name is Arthur Dawson, and he escaped from a New Hampshire prison two days earlier.

The dynamic between Josephine and Arthur is interesting. She’s more concerned about her reputation in the community than she is for her own safety. As such, her initial plan is to comply with her captor in hopes that he doesn’t harm her, gets a meal, and moves onward without her. Of course, it doesn’t work out that way.

Because it’s a Midwood book, there’s lots of sexual tension that arises between Josephine and Arthur. She’s a virgin with a big rack. He hasn’t been with a woman in nine years. You get the picture. Eventually, he takes her on the road to evade the cops, and a romantic interest develops. In fact, The Captive is more of a well-written romance than a violent thriller or a sex-drenched sleaze paperback.

The Captive was compelling, but there wasn’t much meat on the bones. It’s a quick read and never dull - just insubstantial. If you can find it cheap, you may like it, but certainly don’t spend too much on this lightweight distraction of a novel.