The Girl in the Trunk 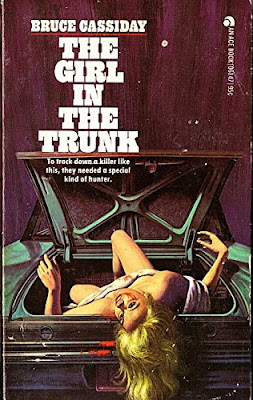 Bruce Cassiday (1920-2005) wrote books in nearly every genre, but it’s his crime and mystery fiction that have stood the test of time and inspired reprints from modern publishers. Case in point: the Bold Venture Press re-release of his 1973 police procedural, The Girl in the Trunk.

The entire paperback takes place over about 12 hours in Honolulu, Hawaii. Jim Egan is a brutal but effective white Honolulu Police detective who’s always ready to bruise his knuckles on a mugger’s jaw. For Egan, it’s less about his professional duty and more about revenge. Years ago, his wife was raped and knifed in front of his house in Waikiki. Since then, the detective has never been the same and finds himself in a perpetual Dirty Harry mode.

Meanwhile, Ki Auna is a young and handsome undercover Hawaiian cop with a personal charm, high IQ, and ability to build rapport that makes him successful. He’s also terrified of the ocean, which presents a real life obstacle when you live on an island surrounded by the churning sea. When Egan and Ki are paired up to investigate a major embezzlement from a local import-export company, we find ourselves in a typical buddy-cop story where two opposite personalities work towards a logical solution with plenty of cultural tension in the mix.

At the paperback’s outset, an undersea earthquake in Chile triggers a set of tsunami waves working their way west across the Pacific Ocean headed for Hawaii (Reviewer Note: This happens frequently in real life. Most of the time, it’s a false alarm. In 1960, it was deadly). The killer tidal wave headed for Hawaii gives Cassiday the opportunity to ratchet up the tension with an impending doomsday scenario humming in the background among the police procedural stuff.

But what about the girl in the trunk? The cover promised a naked blonde corpse in the back of a sedan. What gives? Well, that happens as well, but it takes a few chapters for the financial crime caper to evolve into a dead naked lady story. Is the embezzler also a lady killer? Or is something more sinister afoot? It’s up to Egan and Ki to solve the crime and catch the bad guy before Oahu is washed away by a tidal wave.

The author throws a variety of subplots including one involving the chief of detectives whose daughter embraces the counter-culture of Hawaiian sovereignty and the hippie grifters fronting the movement. Meanwhile, Egan’s brutal treatment of Waikiki muggers is stirring up controversy with the local newspaper that the department doesn’t need. The ensemble cast assembled reminded me of Ed McBain’s 87th Precinct meets Hawaii Five-O.

To his credit, Cassiday gets Honolulu culture and topography pretty accurate with all the right landmarks in all the right places. He also does a commendable job of profiling the mixed-plate of various ethnicities comprising Hawaii’s local populous. Honolulu’s real urban problems - muggings, poverty and racial unrest - were spot-on, and the paperback never falls into the trap of overplaying the focus on beach culture with cartoonish Hawaiian characters. Somehow, Cassiday grasped local culture with great accuracy.

A few years ago, I read and reviewed a 1957 Bruce Cassiday paperback called The Buried Motive that I felt was sub-par. I’m glad I gave the author another shot as The Girl in the Trunk is a far superior novel in every way. It’s a well-written murder mystery, police procedural, tropical island adventure, and disaster novel rolled into 189 pages. What’s not to like?