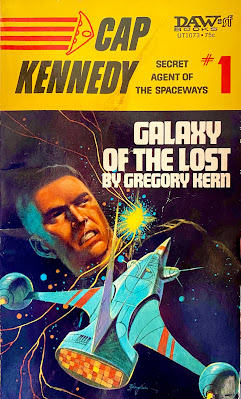 E.C. Tubb (Edwin Charles Tubb, 1919-2010) was a British author that specialized in westerns, science-fiction and fantasy. With more than 140 novels to his credit, most of Tubb's literature has been written under pseudonyms such as Carl Maddox, Eric Storm, George Holt and Alan Guthrie. During five decades, Tubb, used a total of 58 pen names. Not surprisingly, he used the name Gregory Kern for his 1970's space opera series, Cap Kennedy. The series consisted of 16 installments in the United States from 1973-1975. These were published by the popular science-fiction brand DAW. As well, a volume in German was written in 1976 and published in 1983. While the series was titled Cap Kennedy in America, the first six volumes of the series were released in the U.K. under the title F.A.T.E.

In the series debut, Galaxy of the Lost, the author explains that Earth has entered an Interstella era. Due to the colonization and exploration of many planets in the galaxy, many alien races, ambitious outcasts, and dissident human sects now exist. To protect the Earth, a system of mobile aid laboratories and construction authorities (M.A.L.A.C.A.) patrol the peripheral galaxies, in search of anything that could disrupt the utopia. To help this organization is Free Acting Terran Envoys (F.A.T.E.) that investigates the issues and limits any potential threats. Captain Kennedy is considered among the best F.A.T.E. agents. Here's the team:

Captain Kennedy - He is a brave, fearless fighter who uses his vast interstellar knowledge to investigate problems. He's a playboy, slightly arrogant and resembles the stereotypical 1960s fictional secret-agent.

Penza Saratov - He is a male alien with superhuman strength and works with Kennedy's team as an engineer. He was raised on a planet with three times the gravity of Earth and is described as a physical giant.

Vim Chemile - The team's navigator. He's tall and thin and supposedly from a former alien race. He has feline and lizard features and can disguise himself like a chameleon.

Professor Jarl - Neatly dressed human that works as the brains behind the team's missions.

In the opening chapter, Kennedy is summoned to a meeting with a senior trade officer. It is explained that a ship named Wankle has sent out a distress call while traveling on a popular trading route in a faraway galaxy. After probing for more information, Kennedy learns that it is the fourth vessel to apparently disappear after sending an alarm. The premise is that those vessels just disappear out of space. There is no visible damage, no material left behind and no signs of any surviving crew members. It compares to some kind of Bermuda triangle phenomenon.

To investigate these strange events, Kennedy and Saratov agreed to join the next freighter, Hedlanda, headed to this particular location. Journeying just a few hours behind will be the Mordain, Kennedy's ship piloted by Jarl and Chemile. On board the Hedlanda, Kennedy and Chemile conduct typical crew, ship and supply investigations to determine what makes these vessels viable targets for some kind of foreign entities. Before they find the answers, the entire ship enters some sort of space vacuum and is deposited in a frosty dark salvage the planet governed by steel anonymous robots. Which galaxy where they relocated to?

Before buying a second-hand copy of Galaxy of the Lost, I had read lukewarm reviews for this series. Some complained that it was mostly juvenile and a mediocre version of the massively popular Perry Rhodan series. Even though I haven't read Rhodan, I can say surprisingly, that Cap Kennedy is great.

At 125 pages, it is a very short book, yet full of action. The bulk of the narrative features Kennedy, Saratov and a few surviving crew members scrambling along this unknown planet's icy, black surface trying to survive. There is a sense of claustrophobia, a looming threat, and a sense of real isolation and fear. I imagined these tentacled robots as being rather nightmarish in appearance. The author does a great job with the cat-and-mouse chase of man versus machine through abandoned ships and salvage in this monstrous junk yard. I didn't find this to be juvenile in the least. There's some profanity, early sexual innuendo and a great deal of violence throughout. In other words, I'm searching for the second series installment as I write this.