The Case of Jennie Brice 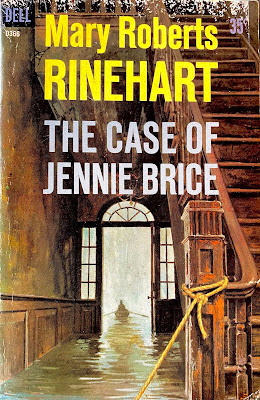 Mary Roberts Rinehart wrote a number of mystery novels, short stories, plays and poetry during a writing career which lasted from 1908 to 1952. She was often referred to as the American version of Agatha Christie. I've recently discovered her work and was delighted with her 1925 novel The Red Lamp. Striking while the iron is hot, I soon decided to read another, The Case of Jennie Brice. It was initially printed as a hardback in 1913 and later reprinted by Dell as a paperback in 1960.

The novel is set in Rinehart's own hometown of Allegheny, Pennsylvania (part of Pittsburgh) and stars a widowed woman named Ms. Pittman. In a first-person account, Pittman explains to readers that she lives in Pittsburgh's flooded neighborhood and runs a boarding house for tenants. As an experienced riverside resident, Pittman began moving residents and property from the lower floor of the building to the second floor. Cleverly, she also ties a small boat to her staircase bannister so she can simply sail down the hall and out into the city when the waters rise.

Two of Pittman's tenants are a married couple, writer Philip Langley and actor Jennie Brice. As the dense rain descends on the city, Pittman begins to hear the couple arguing. The next morning, the boat is found cut and then re-attached to the bannister and there are bloodstains on the rope. In addition, Jennie Brice is missing. Did she leave Langly or was she murdered? When police locate a headless body near the river, the public consensus is that this is the body of Jennie Brice.

As one can imagine, The Case of Jennie Brice ultimately became a complex murder mystery as well as a jury trial. Pittman teams up with a former NYC homicide detective named Howell to determine if Brice is really dead. Throughout their investigation, they learn that the couple were harboring a dark secret (for that time-period) and there may be suspicious grounds for Philip to kill his wife. A beautiful mistress, a mysterious guest, a wounded dog and Pittman's separated family all play roles in Rinehart's compelling story.

The author's brilliant setting really enhanced this moody murder mystery. The very thought that the house is flooded and that Jennie Brice could be drowned in the den below was fascinating. There is also a disturbing tension throughout the house as Pittman begins to suspect other murderers inside. Rinehart creates an equally entertaining subplot with Pittman's relationship with her estranged siblings and niece. The two plots marry perfectly and are enhanced by the final act of the book, the inevitable courtroom drama.

I've never read anything like this before. With its wildly innovative story, the development of the propelling plot and captivating characters, I found it to be a better, although quite different, reading experience than The Red Lamp. Highly recommended.