Strictly Poison and Other Stories 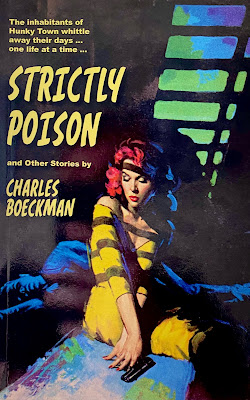 In 2015, Bold Venture Press of Florida captured 24 short stories from the author in a massive volume entitled Strictly Poison and Other Stories. The book consists of four pages of commentaries by Boeckman shortly before he died. In addition, the publisher includes small cover pictures of many digest magazines and pulps that these stories are harvested from. I listed some capsule reviews from some of my favorite stories:

"Should a Tear Be Shed?" was originally published in 1954 by Malcolm's. It is a success story that focuses on the rise of a tap dancer named Lawrence Terrace Jr., a young man that suffered a brain injury when a truck ran him over. When a shyster named Jess Norvell catches Lawrence dancing by a bar jukebox, he puts together a scheme. First, he befriends Lawrence, then has an insurance policy placed on the young man for $50,000 (double indemnity for an accident) with himself as beneficiary. The next logical step is to get Lawrence accidentally killed. However, Jess' girlfriend, Candy, does not endorse the scheme and repeatedly tries to warn Lawrence that Jess is using him for financial purposes. Like any good story of suspense, Boeckman intensifies the tension with multiple attempts at murder. It's an explosive, though not surprising, climax. I loved the story and read it twice.

"I'll Make the Arrest" was one of Boeckman's most successful stories. It appeared in the very first issue of Manhunt (Jan 1953), one of the most highly-regarded digest magazines. The story was also adapted to the television program Celebrity Playhouse in 1956. This is an unusual story involving a police detective named Mike O'Shean tracking down the killer of a beautiful female celebrity. O'Shean has a particular need to locate the killer and, despite the title of the story, has no intention of arresting him. I love how Boeckman, in first person narrative, advises readers of O' Shean's motives: "I went down into the night and where it was dark and alone; I checked my gun because I was going to kill this boy who had strangled Pat." But, the author throws the obligatory curveball and it was a twist I didn't see coming. This was so unique and Boeckman delivered it perfectly with a smooth prose.

Boeckman's musical career contributed to "Run, Cat, Run", a 1949 story initially published in Dime Mystery. The story is about a trumpeter named Johnny Nickle fleeing a murderer. It's a suspensive tale about the musicians who appeared on a hit record called Jazz Date. Unfortunately, all the musicians on the album died mysteriously but Johnny. While frantically jumping from one town to another, Johnny manages to make ends meet by performing dive bars and jukes. But his luck runs out in Texas when a lady with a gun walks into his hotel room. Is she the killer? Or is she also running from a murderer? The story comes to a close on the shore of Corpus Christi Bay. I have always enjoyed novels and stories in the music industry and Boeckman used this aspect well. "Run, Cat, Run" was a real high point to me.

I wouldn't have the blog space to write spacious reviews on all of the high-quality stories included in this volume. Fantastic entries like "Ybor City" (1953 Manhunt), a gritty revenge story set on Florida's Gulf Coast or the wickedly humorous "Strictly Poison" (1945 Detective Tales) is worth mentioning. Even Jacksonville, Florida, otherwise known as the Paperback Warrior headquarters, plays host to the murderous terror of "Class Reunion" (1973 Alfred Hitchcock Mystery Magazine).

In the early 1950s, renowned writers such as Day Keene, Gil Brewer, Harry Whittington and Talmage Powell moved to Florida's Gulf Coast. Boeckman spent several weeks getting together with his colleagues at Day Keene's house to talk about the industry. I feel that Boeckman deserved to be there with crime-noir royalty. He was just a fantastic storyteller and had a knack for portraying broken and financially strapped characters in his story. Whether they were avenged, killed, successful or simply unlucky was in the imagination. Thankfully, Boeckman had it in spades.