The Wrecking of Offshore Five 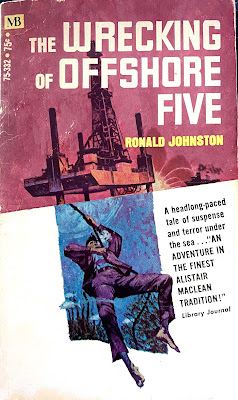 Ronald Johnston is a British author who specializes in novels about catastrophes at sea. Books like Collision Ahead (1966), Disaster at Dungeness (1964), The Angry Ocean (1968), and The Eye of the Needle (1975) all concern large ocean liners and their crew facing perilous storms, tsunamis and fiery collisions. Not surprisingly, my first experience with the author is The Wrecking of Offshore Five, a catastrophic oil rig adventure. It was originally a hardcover release in 1967 and was printed in paperback by McFadden-Bartell at 1970.

In the book, Offshore Five is a British oil platform which is drilling in the icy North Sea. Roger Bright is the leader behind the operation and is counting on his crew to uncover the oil before the leases expire and the operation returns to Danish control. After many weeks of excavation and testing, the platform doesn't discover a drop of oil. While Bright is furious with the outcome, nothing can prepare him for the disaster that awaits him.

When a trawler sails around the platform, a German mine left from World War II is discovered. After a poor attempt to divert the mine to open water, the ship's master inevitably makes a miscalculation and pushes the mine into one of the underwater legs supporting the rig. The blast breaks the foundation of the platform and the entire rig plunges into the dark depths of the ocean.

Much of the novel's narrative is dedicated to the rescue of two survivors who are trapped in an airtight hut on the platform. Johnston puts the reader in the undersea jail with the two survivors - a hardworking Texan and a British scientist. On the surface, Bright directs the press, the rescue operations and the various personnel who will attempt to bring the two men safely to the surface.

Like any good disaster adventure, the premise is either rescue, survival or both. The Wrecking of Offshore Five provides a stereotypical formula that prepares the reader for impact, then introduces complete chaos. The underwater rescue and the events leading to it are enjoyable and Johnston's writing is serviceable. There is nothing spectacular in this novel and it is certainly not a masterpiece of literature. But, if you need a thrilling and fast page-turner for a day or so, it's worth a read. Nothing more, nothing less.