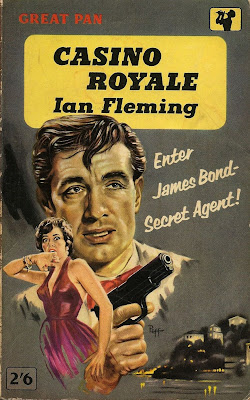 The best-known fictitious undercover agent of all time is James Bond. The character was created by British writer Ian Fleming (1908-1964) and appears in 14 of Fleming's novels between 1953 and 1966, two after his death. Beginning in 1981, authors John Gardner, Raymond Benson, Sebastian Fualks, Jeffery Deaver and others continuously added new original novels in the series. The character became an icon of cinema with 27 films in total featuring the secret agent. Needless to say, you can take a deep dive into the character's history and pop-culture phenomenon on your own time. This review is dedicated to the very first James Bond novel, Casino Royale, published in April, 1953 by Jonathan Cape.

James Bond, 007 is an agent of the British Secret Service (MI6) and works for a superior simply named M. Through brief explanations, readers learn that Bond served in WW2, and later books state he was a Royal Navy officer. The 007, pronounced "double-o-7", is partly a symbolic name that the agent killed an enemy of the state. Bond and his colleagues receive various weapons and trainings from Branch Q, a research and development department.

In this first novel, Bond receives a mission from M to join a high stakes baccarat game at the Royal-les-Eaux in northern France. He's assigned a female companion named Vesper Lynd and an American CIA agent named Felix Leiter as support. The mission is to bankrupt Le Chiffre, a stateless man who brings financial advantages to the Russian counterespionage agency SMERSH. After Le Chiffre lost most of his fortune on a brothel front, he joins this lucrative card game in an effort to recoup most of the money. If he loses, SMERSH will probably kill him.

The first 70 pages of Casino Royale are extremely slow with much of the story transfixed with the art of baccarat. Through pages and pages of card playing, Bond attempts to win the game and at one point gains a large sum of money from Felix. Although this first half doesn't provide a captivating story, Fleming definitely shines in the second half of the novel.

Bond's romantic relationship with Lynd builds into a crescendo. Bond is considering leaving the espionage business and marrying Lynd. He even dreams of settling in a suburban environment where foreign adversaries simply do not exist. It is this very humane aspect that makes this book and this character so interesting. Once Bond leaves the casino, Fleming ratchets up Casino Royale with car chases, gunfire, a long and breathtaking torture sequence and the required violence to emphasize that Bond is fighting some truly bad people.

Like Donald Hamilton's Death of a Citizen, there's a savage scene where James Bond evolves into the British agent that we know today. It is the mythology of a very human person transformed by violence into a living and breathing weapon. Hamilton did it with Matt Helm. Pendleton did that to Mack Bolan. Fleming does it with expertise with James Bond. The final sentence of the book is one of the strongest lines in fictional history - in my opinion.

Whether you saw the comedy movie version of Casino Royale or the modern remake with Daniel Craig, nothing is comparable to the book. Considering the first half is rather lackluster, the strength of the second half more than makes up for the failure. The last line of the book introduces themes and villains that Bond will contend with for the life of the series. As an origin tale, Casino Royale delivers on all fronts. Highest possible recommendation.