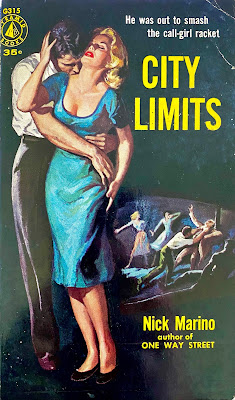 Will Oursler (1913-1985) was an American author, lecturer, radio commentator and the son of notable novelist Fulton Oursler. Over Oursler's career, he authored a number of non-fiction works as well as crime-fiction novels under his own name as well as Gale Gallagher (Chord in Crimson, I Found Him Dead).

Using the pseudonym Nick Marino, Oursler wrote the book One Way Street in 1952. It was the first of two books featuring tough Assistant District Attorney Mike Macauley. The second Macauley novel, City Limits, was originally published in 1958 by Pyramid and then later reprinted again in 1963. It is currently available as an affordable ebook via Wildside Press. Although Nick Marino's name is on the cover of City Limits, my research indicates that the novel was authored by Richard Deming. Apparently Oursler wrote the outline for the book and either gave it to Deming by way of an agent or publisher. The ultimate result is City Limits is by Richard Deming under the pseudonym of Nick Marino.

Assistant D.A. Mike Macauley lives and works in an unnamed city in Missouri. Mike's friend and colleague Harry works for the city's vice squad. In the book's opening pages, Harry is on the stand providing testimony on his collar of a prostitute named Gloria Townsend. After beating the rap, Gloria phones Macauley and offers information on the location of a call girl racket outside the city. She asks Mike to meet her near the area in a country and western bar. When Mike arrives, he finds Gloria nearly beaten to death in a bathroom stall and a dense coverup from that town's sheriff.

Investigating the beatings and the testimony of Gloria, Mike finds himself in a perplexing position. The call girl ring is run outside of city limits and outside of Mike's jurisdiction. Furthermore, Mike's administration, including Harry and the police, may be involved in this prostitution scheme and is continuously fighting Mike's efforts to stop the operation. His only ally is Gloria when the two of them find themselves as targets by the ring's hired killers.

There's a lot to like about Deming's fast-paced narration. There is violence, romance, a profound mystery and a number of outlaws and shady ladies. I found Mike's position as Assistant D.A. a suitable replacement as a stereotypical private detective. Like a Mike Hammer, Mike Shayne or Johnny Liddell, Mike's quest for justice contains the typical protocol - working with a sexy secretary, finding allies within the local law-enforcement and beating the streets searching for clues and answers. There is also a bureaucratic examination of the chain of command between the prosecutor's office and the police.

Overall, this was another fantastic crime-fiction novel by Richard Deming. I'm not sure how this compares to the first Mike Macauley novel considering it was written by a totally different author. I can only say that I loved this character and thoroughly enjoyed City Limits.