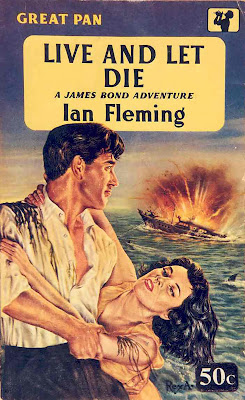 British author Ian Fleming created what is generally believed to be the most popular secret agent of all time, James Bond. The series began in 1953 with Casiono Royale, an origin novel that introduced Bond's continuous war with Russia's counterespionage agency SMERSH. Nearly a year after Casino Royale's publication, Live and Let Die was released. It's the second novel in the James Bond series and features many elements that were dissected and added to the Bond films For Your Eyes Only (1981) and License to Kill (1989).

In Live and Let Die, Bond is ordered by M to investigate a villain named Buonaparte Ignace Gallia, otherwise known as "Mr. Big". The dense plot has Mr. Big as an African-American voodoo priest utilizing 17th century gold coins to fund operations for SMERSH. In the opening chapters, Bond's investigation leads him to Harlem, New York.

Partnering with CIA agent Felix Leiter (who also starred in Casino Royale), Bond locates Mr. Big in a lavish nightclub. But, the two are quickly captured by the villain and Bond finds himself being tortured by Mr. Big while having his fortune read by a beautiful woman named Solitaire. After Bond's finger is brutally broken, the British agent and Felix manage to escape. But once they arrive in St. Petersburg, Florida to search for Mr. Big's warehouses, Fleming escalates the violence and tension. In a horrifying manor, Felix is written out of the book (and possibly the series) and Bond gains an assist from Solitaire in fighting the vile villain.

I challenge anyone to say this is a worthy sequel to Casino Royale. While I didn't hate the book, I found it to be absurd even in the often wacky world of fictional espionage. Mr. Big is a strange villain and the book's multiple locales warranted a more epic storyline. Instead, Bond fights Mr. Big in nightclubs, a giant aquarium and an underground oceanic cavern in lieu of a high-wire spy act. While Fleming obviously spotlights the action, the plotline left something to be desired. If you can swallow the far-fetched story, Live and Let Die is still a pleasurable reading experience.