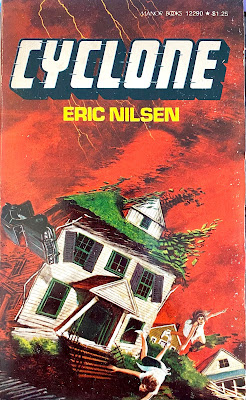 Whether it's horror or adventure, disaster fiction has a dedicated following of fans and enthusiasts. Throughout the twentieth century, readers were compelled to read about natural disasters, ocean collisions, post-apocalyptic creations and weather-related disasters. Maybe this genre has the same kind of vibe as the rubber-necker pushing his head through the car window to see the horrible wreck on the road. It was this sort of curiosity that led me to open Cyclone, a 1975 Manor paperback by an author named Eric Nilsen.

The book starts with a commercial bus full of passengers arriving in the small town of Garfield, TX. On board is a cast of colorful characters ranging from a rodeo cowboy, a school teacher, a farmer, and an old grizzled sailor. But Nilsen's two main characters are on board as well, an undercover Denver detective named Bowman and his prey, a drug dealer named Palermo. Bowman knows Palermo is holding a suitcase filled with $500K worth of heroin, which will eventually lead to a drug trade empire. But, the bus driver is forced to stop in this dusty rural town because of tornado reports.

After Nilsen introduces the bus and its passengers, two more characters join the story - Garfield police officers Roblez and Youngblood. These two lawmen are in a scramble to move most of the small town into the civic auditorium before the deadly cyclone touches down. While the passengers and cops move around in the backstory, a radio DJ named Bob runs the town's radio station from across town. He dishes out the hits and the weather reports for readers and the town's inhabitants.

Like most disaster films and books, the setup has to be perfect. The idea of caring about the characters who are in danger allows for a more emotional experience. For the most part, the first 30 or 40 pages of Cyclone set up the inevitable destruction very well. When the tornado begins to rage, the book takes off.

Roblez and Youngblood are both involved in a number of rescue attempts, the most fascinating being a nine-year-old girl trapped beneath a wrecked trailer. There's also Bob's lonely ordeal at the radio station and his efforts to report the chaos. Meanwhile, the municipal auditorium and a local dive bar are full to capacity and the stressed human interaction ends up turning into violence. At the end of the book, Bowman's quest to bring Palermo to justice is carefully closed, but with a surprise.

Cyclone isn't a must-read disaster novel. But, considering this is an unknown author and Manor is one of the lowliest publishers of disposable fiction, it was a fun read. With the lack of profanity and detailed violence, it reads like a long Scholastic book. Or, what would have made a fast-paced made-for-television movie of the week. If you find a cheap enough copy it's worth a read.