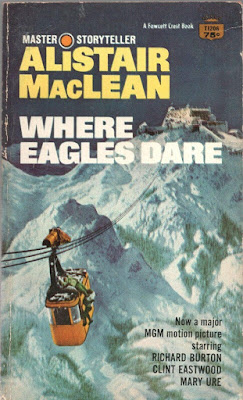 In addition to being a catchy anthem of heavy metal and a hit movie, Where Eagles Dare is perhaps also Alistair MacLean's most beloved literary work. The Scottish writer enjoyed a prolific career with such incredible novels as Ice Station Zebra (1963) Breakheart Pass (1974) and The Guns of Navarone (1957). So, choosing the most recognized and loved MacLean novel is rather difficult. But, Where Eagles Dare, originally published in hardback in 1967, definitely seems to stay timeless with generations of fans and readers.

This World War II adventure novel begins in high altitude as a group of Allied paratroopers prepare their descent into Bavaria, Germany. The team is led by British Major John Smith and the objective of the mission is rather vague in the first chapters of the book. The beginning of MacLean's narrative has the group embark on the perilous landing high on a snowy Bavarian mountain range. After one of the members is mysteriously killed on the ground, Smith suspects there may be a traitor in the ranks. In addition, Smith conceals key information from the team regarding the radio transmissions and hides that another team member jumped from the aircraft to secretly accompany the mission.

The majority of this novel unfolds over a 24-hour period. Ultimately, the mission unveils itself as a retrieval assignment. A U.S. General who devised part of the strategy of the Western Front was captured by the Nazis. He is being held at the Gestapo headquarters in a castle named Schlos Adler. The Allied team has to disguise itself as German soldiers and infiltrate the castle. In doing so, they will save the General and preserve the opportunities of the Allies to continue building the Western Front.

Needless to say, MacLean's novel flourishes with a number of high adventure scenes in the mountains, numerous car chases and gun fights. The iconic cable car scene from the book's cover is impressive and consumes much of the book's furious finale. However, my favorite aspect of MacLean's story is simply the secret agent formula of these men convincing many senior officials in Germany that they are indeed German. There is such tension in some of these intimate scenes involving a myriad of characters.

There are also entertaining and funny exchanges between Smith and the U.S. Army Ranger Lieutenant Morris Schaffer (represented by Clint Eastwood in the movie adaptation) who help to lighten the mood. As one would expect, there are so many twists and turns that the story evolves into a completely different type of mission. In doing so, these two consistent and likeable characters really dominate most of the book's narrative.

Where Eagles Dare is as good as it's supposed to be. This is the iconic, captivating novel of high adventure that has been promised. Highest recommendation available.