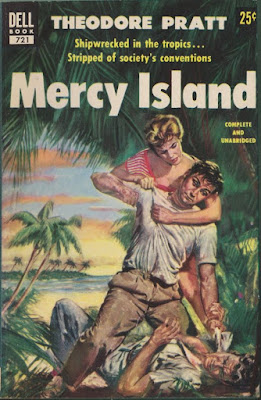 Author Theodore Pratt (1901-1969) was born in Minnesota and later moved to New York, where he worked as a play reader and a writer for the The New Yorker and The New York Sun. He developed his writing skills into a full-time career that included more than 30 novels, some of which were written under the pen name of Timothy Brace. In 1941 his first novel, Mercy Island, was published in hardcover. The film was also adapted for cinema the same year by Republic Pictures. In 1956 the book was published in paperback format by Dell with attractive artwork by Verne Tossy.

Pratt was known to present most of his novels in Florida and the surrounding region. This trope is heavily used with Mercy Island with its Florida Keys tropical location. In the book's opening pages, readers learn that Ramsey, his wife Leslie and an acquaintance named Foster have hired a fishing charter. In an act of reckless abandonment, Ramsey demands that the boat's captain takes the three of them into a choppy stretch of water in a rural portion of the Keys. After catching a big fish, Ramsey's stubbornness with the captain and his companion Wiccy leads to the boat becoming grounded on an isolated tropical island.

Mercy Island's first act is similar to a Burno Fischer short story called "Hostesses in Hell", originally written under the name Russell Grey and published in the March-April 1939 issue of Terror Tales. In the story, a sailor and seven women arrive on a tropical island to escape a devastating storm. Fischer wrote his story like a complete horror tale where Pratt only bypasses the edges of terror. In Mercy Island, the five characters venture onto the island and finds a small house nestled in the dense foliage. There are signs of a turtle that's been disemboweled and eaten as well as indications that more than one person lives in the house. As Ramsey, Leslie and Foster travel further into the house, they begin to realize that the captain and his mate share a secret about the island.

To share anything beyond this premise would be an injustice to prospective readers. Pratt's characters display a number of immoral sins ranging from desire to arrogance. Ramsey's dispute with Foster is adjacent to his battles with the only resident of the island. This is a highly effective melting pot of suspense throughout the first half of the book. The second half was rather slow with a story that seemed to concentrate on island survival, hunting and fishing. As interesting as the characters were, the story itself just fizzled out. I found myself jumping through pages just to escape the boredom of this lackluster island. Mercy Island isn't a tropical destination anyone needs to visit. Read at your own risk.

Buy a copy of this novel HERE