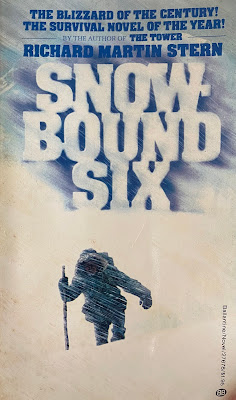 Perhaps one of the greatest disaster movies of all time was the 1974 blockbuster The Towering Inferno. Led by an all-star cast, the film was partly adapted from the novel The Tower by Richard Martin Stern (as well as The Glass Inferno by Thomas Scortia and Frank Robinson). It was the author's best-seller and led him to write other catastrophic novels such as Wildfire (1985), Flood (1979) and Tsunami (1988). With June temperatures soaring in Florida, I sought to cool off with Stern's 1977 novel Snowbound Six. As you might suspect, the theme is a blizzard.

In the opening pages, Warner Harlow, his wife and their two teenagers are traveling a steep mountain road into the high peaks of the fictional New Mexico town of Santo Cristo. Warner plans to spend a few days hunting elk with a friend as the family rest and relax in winter heaven. However, a massive storm front has moved in with heavy snowfall. The drive up the mountain stalls as the family finds themselves lost in whitening confusion. Luckily, a Vietnam War veteran named Ben is hiking in the mountains and finds the family in desperate need of assistance. Together, they head towards a cave, hoping to survive the storm.

While the Harlows are dealing with cave survival, an American Senator and his mistress, Lila, crash a small plane into the mountains. Ben hikes to the damaged plane hoping to find a working radio and survivors. The Senator is found dead and the radio is smashed. Lila, nearly injury free, accompanies Ben back to the cave to make up the snowbound six.

The novel obviously spends the majority of the time on the cave survivors and their quest to endure the harsh blizzard. However, the characters double when Stern introduces a rescue team of experienced mountaineers and survivors. Their efforts to climb the mountain in the hope of a rescue predominate most of the second half of the book. Although each of the characters had their own identity, traits and skills, I always had trouble remembering who the characters were and their positions across the mountain range.

Stern's writing is good, and I thought his dialogue sequences were amazing. The only fault I have in his writing style is the fragmented presentation. The story features paragraphs or half-pages dedicated to a scene, place or character. An example, may be Billy attempts to gather wood for the fire followed by a half-page of Ben talking to Lila before another half-page or paragraph of something happening within the town. It could have been the editor's or Stern's decision, but the final outcome was rather choppy.

Despite the formatting and editing of the book, Snowbound Six was a great novel filled with high adventure and a tense atmosphere. If natural disaster books are your thing, it's a simple recommendation.