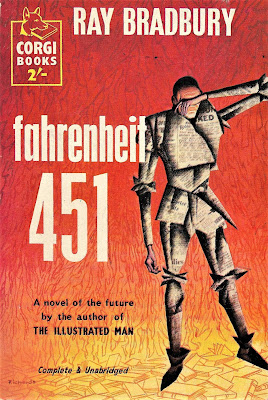 Ray Bradbury (1920-2012) is a beloved author with a lasting legacy that includes both screenplays, short stories and novels. His literary works crossed multiple genres like fantasy, science-fiction, horror and speculative fiction. I can remember reading a few of his shorts in grade school and promising myself, I would explore the author's bibliography. 30 years later, I've decided to read one of his most popular novels, Fahrenheit 451. It was originally published in 1953 and has been reprinted countless times over the years. It was adapted to film in 2018 starring Michael B. Jordan.

At 165 pages, Bradbury's Fahrenheit 451 is set in a Dystopian future that reflects much of our daily lives today. In this rather bleak future, people have become seemingly anonymous. Most of the population spends a majority of their lives in their residence watching endless programming on their "wall video". Social interaction is limited and emotional feelings are suppressed.

The main character is Guy Montag, a fireman who works for the government destroying anything deemed unacceptable by his employer. This is mostly books (and sometimes the people that possess them) and the homes they live in. Instead of the typical fireman extinguishing fires, Bradbury spins it and firemen in this society burn freedom. "It was a pleasure to burn" is Montag's opening statement, a statement that implies that he is enjoying his job and its sense of power and authority.

When Montag meets a creative thinker named Clarisse, his entire perspective begins to change. She urges him to question his own existence and its purpose. Why do we burn books and live in a predictable world with little variance? With the seed planted, Montag begins to break down the barriers to expose not only his own freedom but others.

The closing pages of Part One is absolutely remarkable. If you don't want to read this novel, at the very least I recommend reading a thought-provoking portion of the narrative. A Fire Chief explains how society arrived at this anonymous and cold existence and why his firemen burn books. I could probably write an essay on this part of Bradbury's novel. If you read nothing else, read that.

The book's prediction of flat screen TVs and earbuds is just the tip of the iceberg. The social commentary is mesmerizing and really kept me awake just analyzing the final closing pages. Bradbury's classic novel is an eerie prophecy that predicts so many aspects of our current day-to-day. It's an important reminder that freedom should never be taken for granted. At the same time, it's a tutorial on how to avoid Fahrenheit 451's nightmarish future.