Brion Brandd #01 - Planet of the Damned 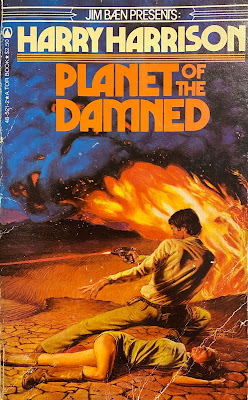 Harry Harrison (1925-2012) was a critically-acclaimed science-fiction author who is best known for his 1966 novel Make Room! Make Room!, the basis for the 1973 film Soylent Green. In addition, he also gained fans and admirers when he debuted his Stainless Steel Rat character in a 1957 issue of Astounding. The character would appear in 12 total books through 2010. My first experience with Harrison is his 1962 novel Planet of the Damned. I discovered it when I located a 1975 Tor paperback reprint of the book complete with artwork that suggested this might be Nick Carter: Killmaster in Space. Is it?

Brion Brandd is the champion of his home planet Anvhar. To be considered his planet's champion, Brandd had to compete in a global competition called The Twenties. It's here that men compete in grueling matches of chess, poetry recitals, fencing, skiing, fighting, shooting and a whole lot of other exercises that test the mind and body. This is where readers first meet Brandd, locked into a final struggle with the last competitor. After winning, Brandd is taken to the local hospital to rest and rehabilitate. It's there that he meets an off-world stranger named Ihjel.

Ihjel explains to Brandd that the two of them share a unique psychic gift. Ihjel has developed this unique mental prowess as a way to gain the feelings or desires of anyone he meets. Brandd can utilize this to an extent, but will need to “Jedi up” to really learn how to harness its true power. This gift that Brandd has is exceptional when combined with his overall athleticism and intelligence. Who better to stop a nuclear holocaust other than a planetary gold medalist that can read minds?

In a one-sided conversation, Ihjel illustrates that the planet of Dis is populated by a race of very primitive people that behave in neanderthal ways. Their planet is a scorching firebed of hot sands with temperatures rarely below 100. It's an undesirable planet that is barely inhabitable beyond the race of people that have adapted to its harsh conditions.

Dis's neighbor is the civilized planet of Nyjord, a typically nice place filled with people who behave properly and know exactly which fork to use at formal dinners. Unfortunately, Dis hates Nyjord. In an early war, a small assortment of deadly weapons were left on Dis and now, after all of these years, the neanderthals have found them. Demanding Nyjord's unconditional surrender, the Dis people are set to annihilate their neighbors. What they don't know is that Nyjord has provided a 3-day deadline for peacekeepers, like Ihjel, to visit the Dis people and convince them that the idea of attacking their neighbor is a poor one. If they refuse to peacefully disarm, Nyjord will unleash a wrath of nuclear devastation and Death Star their whole planet.

Harrison's short narrative features Ihjel and Brandd teaming with a female scientist from Earth as they visit Dis in hopes of a peaceful resolution. But, as you can imagine, things don't go as planned. The Dis people immediately send assassins after the trio, forcing them on the run in search for allies and answers. While Nyjord presses a sense of urgency, Brandd begins to suspect that the Dis people want to live in peace and that their leaders may actually be hostile alien forces in disguise. Through investigations, Brandd searches for the weapons, gets laid and joins a team of Nyjord commandos as they battle enemy forces.

There's no doubt that Harrison is placing this interstellar war between neighboring planets as a representation of Earth's own Middle-East power struggle. In addition, the author utilizes the same formula as James Bond, a series of novels and movies that were already blockbuster hits at the time of the book's publication. The early 1960s hosted a spy-fiction sensation, and I can't help but think this is the science-fiction version of that. It possesses all of the same familiar tropes – international romance, a cache of nuclear weapons, trained killers and guns galore.

Whether you like science-fiction or not, Planet of the Damned moves at a brisk pace with an engaging story and capable hero. While it isn't mandatory reading, it's a solid, fun read that never left me bored. The character of Brion Brandd appears again in one additional novel, 1982's Planet of No Return.