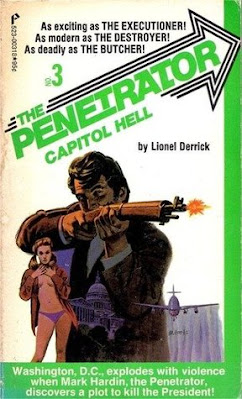 We've covered the first two Penetrator novels, authored by Mark K. Roberts (odd numbered installments) and Chet Cunningham (even numbered installments) using the pseudonym Lionel Derrick. This was a long-running men's action-adventure series published by Pinnacle in the style of The Executioner and The Butcher (among others). Mostly, this is just fun escapism that's completely disposable. The series is available in audio book format through Books in Motion, narrated by Gene Engene or Kevin Foley, which is typically how I enjoy this series, and in digital by Wolfpack.

In the series third novel, Capitol Hell, Mark Hardin (The Penetrator) witnesses a car crash involving a Mob goon. The criminal's dying breath whispers the word “SIE”, which leads Hardin to a special Washington D.C. club called Societe International d'Elite. This reminded me of Ian Fleming's Moonraker, when James Bond is invited to join the posh club at Blades in London. Hardin not only wants to learn more about the club and its relation to the dead mobster, but also who assassinated the press secretary to the President of the U.S., which just so happened to be Hardin's buddy.

There's an oddball cast of club members that have established a secret club within the club. They dress in robes, partake in weird chants, and have obligatory plans to take over the world. This club nonchalantly provides hypnotic drugs to the VP and have a strategy to blow-up Airforce One, which is utterly ridiculous. Also, once the club takes control of the U.S. (and I guess the Speaker of the House, Senate leader, and Secretary of State) they will force more military chaos in Latin America to increase their profits.

For the most part, Capitol Hell is a fun ride filled with outrageous moments of unintentional hilarity and wild action-adventure. Hardin is nearly indestructible, gets laid by two women, and fights this clandestine cult-club on a golf course and in old Williamsburg, Virginia. His tools of the trade are his trusty Colt Commander .45 and a dart gun (1 dart for sleepy, 2 for death!). These books tend to connect to each other in small ways, and Capitol Hell connects to the last two events in Los Angeles and Vegas. It isn't necessary to read them in order I suppose, but why not? If you are taking the trouble to track down the series, buy them in sequential order.