A Great Day for Dying 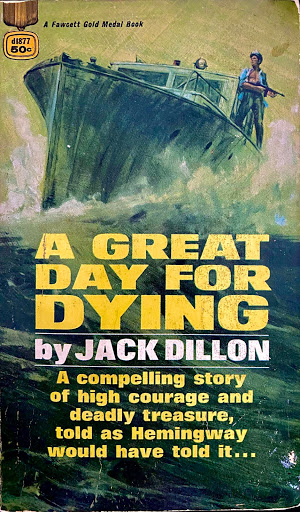 While very little is known about author Jack Dillon, it appears that he worked advertising creating a series of commercials for Polaroid. This advertising-executive experience was the catalyst for Dillon's 1972 dark fiction novel The Advertising Man. My only experience with the author is his men's adventure novel A Great Day for Dying, published by Fawcett Gold Medal in 1968.

The book's protagonist is Jimmy O’Neil, a boat captain who illegally runs arms from San Juan to Cuba. When readers first meet him, he's down on his luck and making ends meet while attempting to fix his boat. As the opening chapters unfold, it's disclosed that O’Neil used to work for a mid-tier mobster named Red. Their partnership ended, but their friendship persevered. In fact, O’Neil still shares a lover with Red and occasionally works side-jobs for the mob if it doesn't involve drugs.

When Red double-crosses his mob boss to the tune of $500K, he initiates an elaborate plan to smuggle heroin within a large camera shipment. But to make the delivery, he needs a fast boat and an experienced operator like O’Neil. Together, the two take on the tough assignment despite the U.S. Navy's presence and the mob's far-reaching influence.

I really enjoyed Dillon's writing style but it doesn't come with some distractions. While O’Neil's portions of the narrative are presented in the first-person, the chapters dedicated to the  mob are in the third-person. It's a unique effort by the author to keep readers more intimately connected to the protagonist, but also left me a little seasick with the choppy narrative flow. The cover's tag of comparing the story to Hemingway is pure marketing hyperbole. Dillon's characterization of O’Neil doesn't have any deeper meaning (that I could find) to the story beyond what was presented in the dialogue and action sequences.

Overall, A Great Day for Dying was a fun, entertaining nautical adventure with a subplot of compelling mob-related activities. According to my research, it has never been reprinted. It is definitely worth your money if you can locate a used copy.