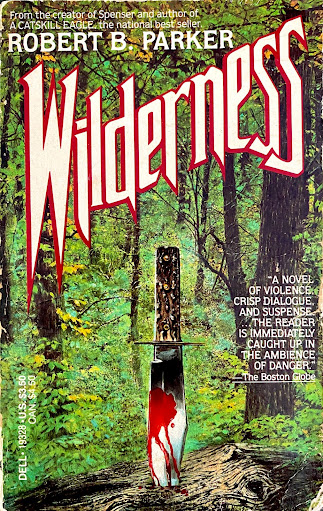 Sparked by the violent 1972 film Deliverance (based on the 1970 novel by James Dickey), the 1970s were filled with literary and film thrillers involving hunters or hikers encountering criminal activity in the remote wilderness. Author Robert B. Parker established his cash-cow character of Spenser in 1973 and decided to venture out with his first stand-alone novel in 1979, a Dell paperback aptly titled Wilderness that remains in-print today. The book is a deep-forest survival tale that pits the average citizen against hardened criminals in desolate Maine.

While jogging home from the gym, successful author Aaron Newman witnesses a woman being shot in the head. After talking with the police, he identifies the shooter as a notorious bad guy named Karl Randolph. Aaron agrees to testify against Karl in court with the police’s assurances that Aaron’s identity won't be revealed until the testimony begins. However, after returning home from the police station, Aaron finds his wife Janet nude and hogtied with the initials K.R. carved into her abdomen. Freeing her, Aaron receives a call saying that his family won't be murdered if he tells the cops that he fingered the wrong guy as the shooter.

Placed in a conundrum, Aaron takes the safe road and tells the police it was all a mistake. The cops, knowing that Aaron has been threatened, urge him to testify. Their warnings that Randolph never lets any witness live haunts Aaron and Janet. The two seek out their good friend Hood, a badass Korean War vet, to hunt down Randolph and kill him instead of prolonging the ongoing fear. After flunking a few attempts, the three decide the hit is best executed at Randolph's secluded mountain cabin in the Maine forest. But it's here where things get complicated and the three find themselves facing a group of armed men in the rugged wilderness.

Even though the “wilderness” aspect doesn't really come to fruition until halfway through the novel, the suspense leading up to the outdoor thrills is riveting. Oddly comical, the scenes where three civilians attempt to organize the murder of a vicious mobster over beer and steak were just so much fun to read. There's some action early on, the proverbial cat-and-mouse tactics and some interesting revelations about Aaron and his wife that add more depth to this action-thriller.

While the title Wilderness bluntly describes the book's eventual setting, I can't help but think that Parker was speaking of the savage human condition in all of us. When faced with the threat of death or family harm, Aaron and Janet delve into a dark, almost neanderthal state where survival of the fittest is the only thought. Whether it's an underlying subtext on humanity or just simply a twist on the western frontier tale, Wilderness excels as a pleasurable reading experience. I continue to find great things about Robert B. Parker's writing style, and Wilderness is just another fine example of his remarkable storytelling ability.

Email ThisBlogThis!Share to TwitterShare to FacebookShare to Pinterest
Labels: Robert B. Parker