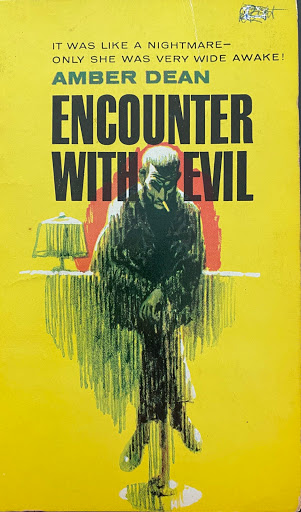 Aside from the seven-book series of Abbie Harris mysteries, Amber Dean authored ten stand-alone crime-noir and mystery novels between 1944-1973. My first experience with the author was 1959's Bullet Proof, a novel that was well-written but poorly executed. After acquiring a copy of her Pocket Books paperback Encounter with Evil from 1961, I found the chilling synopsis just too inviting to pass up.

The book's opening pages finds David, his wife, and their 15-year old daughter Lauren traveling by car through a rural stretch of Ontario, Canada. At 2:00AM, with their daughter safely tucked away in the backseat, the couple walk into a diner for some early morning coffee. Oddly, ten men file in sporadically over the course of twenty minutes followed by the awakened teenage Lauren. After locating her parents, Lauren announces that she’s returning to the car to get some more sleep. David and his wife pay for their meal, get back in their car and drive 45-minutes down the road before glancing into the backseat to discover that Lauren is gone.

Like a Twilight Zone episode, the couple head back to the diner and find that it's mostly closed with a couple of men still sitting inside. The customers claim that they never saw the family and maintain that the diner didn't have a female waitress when they were there. After disputing their side of the story, the couple head to the local police station where they are surprised to learn that the diner would have been closed for business at 11PM and the waitress they claim served them left town with her husband the day before. The Canadian cops show some anti-American bias by accusing David of lying about the whole thing.

I'm not ruining anything for you that you won't read on the back cover. Encounter with Evil is a riveting suspense story that thrusts the parents into extraordinary circumstances. Lauren's fate is eventually revealed to the reader, but we are along for the ride as her frustrated mom and dad attempt to buck the system of small-town injustice in their attempts to find her. The narrative switches between Lauren’s experience, the parental nightmare, and a few surprising characters with unclear roles that aren’t fully explained until well into the novel.

While not perfect, Amber Dean is a terrific writer. Like Bullet Proof, I found that some elements weren't perfectly executed but generally well enough to satisfy readers. I wish her writing style had a more gritty flavor, perhaps with more violence and death. Instead, this is a pretty tame novel and not a far-stretch from modern young adult fiction. Nevertheless, I read it in nearly one sitting and thoroughly enjoyed it. I hope to find and read more of Dean's vintage paperbacks in the future.