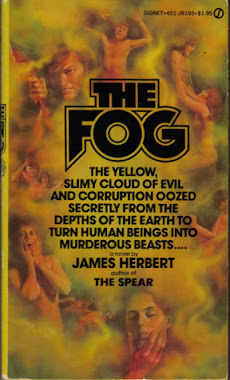 British author James Herbert (1953-2013) was the director of an advertising agency before striking it big as a horror author around the time Stephen King was doing the same thing accross the Atlantic. Herbert’s first novel, 1974's The Rats, began a successful 23-novel career with worldwide sales exceeding 50 million copies. I’ve heard great things about Herbert and decided to start with his second book, 1975’s The Fog.

The novel begins in the quiet English village of Wiltshire where nothing much ever seems to change. Our hero is John Holman, a government environmental crimes investigator. While investigating misuse of defense department land, he stumbles upon Wiltshire as an earthquake strikes. The rumbling opens a giant fissure in Main Street swallowing shops and several citizens along with it. This is followed by some exciting disaster-movie sequences where Holman rescues a child before she plunges to her death into the earthly abyss.

Herbert doesn’t waste any time with drawn-out character development. Immediately following the earthquake, a thick yellow cloud of fog begins to rise from the new crack in the earth. The menacing vapor appears to be sentient with tendrils reaching toward intended victims who are driven insane as they are enveloped by the fog.

Like the Coronavirus, the fog infects different people in different ways. Some become axe murderers while others urinate all over their neighbors. There’s also a good bit of genital trauma for the reader’s enjoyment, if not always the characters. These varied effects are presented in several action-packed, violent vignettes resembling individual short stories throughout the novel. The big question: Are the effects of the gas permanent or will the afflicted return to normal? Secondary question: Is the fog somehow related to experiments taking place on the nearby military base?

For a horror novel, The Fog isn’t particularly scary, but it’s an excellent action novel with plenty of violent surprises. It reminded me of an environmental disaster story, a medical thriller, and a high-adventure rescue mission. Other sections recalled a modern zombie adventure or even my favorite Able Team installment, Army of Devils by G.H. Frost. There were also several gratuitous and graphic sex scenes, if that’s your bag.

Overall, The Fog was an outstanding page-turner. The plotting was fast-moving and never dull, and the dilemmas encountered by the heroes were approached rationally. There was plenty of violence and gore to please any action-minded reader. Highly recommended.

The 1980 John Carpenter movie, The Fog, was unrelated to the James Herbert novel. Many of Herbert’s novels were adapted into films, but The Fog exists only on the written page and your beloved Kindle device.