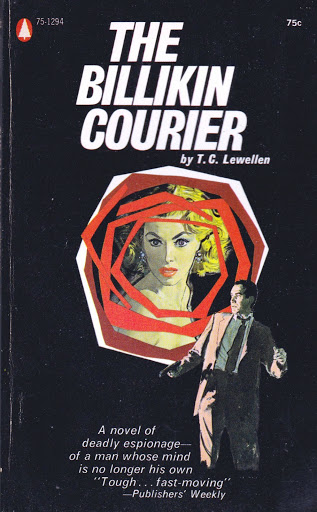 Ted C. Lewellen (1940-2006) was a Professor of Anthropology at the University of Richmond and the author of several scholarly works about the effects of globalization on third-world economies. He also published two genre novels for dum-dums like me. His first book was a Fawcett Gold Medal western paperback called The Ruthless Gun from 1964 that people really seem to love. However, I’m starting with his 1968 espionage paperback, The Billikin Courier.

The novel’s first-person narration is presented by a San Francisco whiskey bum named Robert Chessick. Ex-Army, divorced, homeless, drunk. He’s always one panhandled dollar away from his next drink like a character from a David Goodis story. Chessick isn’t the kind of guy anybody really cares about. That being the case, why is someone following him?

Chessick’s shadow is a specific guy wearing a specific hat. One night, he decides to confront the follower and is knocked unconscious. Upon awakening, Chessick’s mysterious pursuer is lying dead on the ground, and Chessick is covered in his blood. Problems, problems, problems.

Meanwhile, there’s a news story humming in the background that any astute reader knows will prove to be important later. A scientist working on a top-secret laser project commits suicide and his records and formulas are missing. The FBI and police are turning San Francisco upside-down to recover the secret materials. As you can imagine, the Russians would love to get their commie hands on the technology as well.

Eventually, Chessick is visited by an FBI man who explains how he fits into all this. Unfortunately, the cover blurbs on both the hardcover and paperback give away the game. The big plot reveal owes more than a little to 1959’s The Manchurian Candidate by Richard Condon, a similarity that probably helped The Billikin Courier get published in the first place. In any case, having one’s brain be used as an external hard drive for state secrets presents some danger for our hero.

Despite some derivative plot points, corny scenes and slow sections, The Billikin Courier is a well-written and mostly interesting espionage novel about a less-than-remarkable everyman thrust into extraordinary espionage intrigue. In that regard, William Goldman’s Marathon Man from 1974 is an apt comparison - although Marathon Man is a far superior novel. Overall, the book was a fine way to pass a few hours, but in the vast world of spy fiction, it really only merits a footnote.