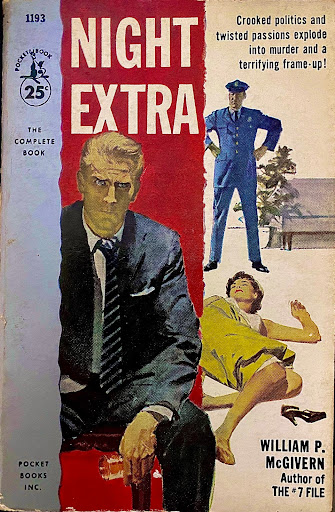 World War 2 veteran William P. McGivern worked as a a police reporter for the Philadelphia Bulletin and The Evening Bulletin before publishing his first novel in 1948. Specializing in crime-fiction and mysteries, McGivern's journalism experience clearly played a large influence on his narratives and plot-points. Nothing showcases that more than his novel Night Extra, published by Pocket Books in 1957.

The book's hero is newspaper reporter Sam Terrell. While working the “night extra” (a special late evening edition of the newspaper recapping important events), Terrell receives a tip that Richard Caldwell, white-hat candidate for mayor, may be having an affair with a mob kingpin's girl. After interviewing the girl, Terrell learns that she has secretly relayed some mob details to Caldwell in hopes that he can use it to win the election. However, hours later it's reported on the police scanner that the girl has been found dead in Caldwell's apartment. Terrell thinks it's a frame job and can validate it with an eyewitness that says the killer wasn't Caldwell. When his sources are questioned and his story buried, Terrell sets out to set the record straight for the public.

Like any hardboiled crime-fiction protagonist, Terrell interviews key witnesses and participants to shake down an unnamed city's corruption. McGivern's contemporary, author David Alexander, utilized the same formula for his eight-book series starring Broadway Times reporter Bart Hardin (1954-1959). Other authors like Richard Sale and Fredric Brown wrote short-stories starring newshounds that worked like private-eyes to break or solve murder cases. McGivern's positions his hero to crack the case, but he stacks the deck with crooked cops and politicians for the hero to combat. The author adds some social commentary on the media's ability to sway voters with their story, an ethical message that is still prevalent today.

Night Extra doesn’t reinvent the hardboiled formula, but the author certainly showcases his talents and strengths in perfecting it. This was a fast-paced narrative with some touching characters in which readers will invest. I'm not sure if Terrell was a recurring character in McGivern's other novels. But if he wasn't, he should have been. Highly recommended.