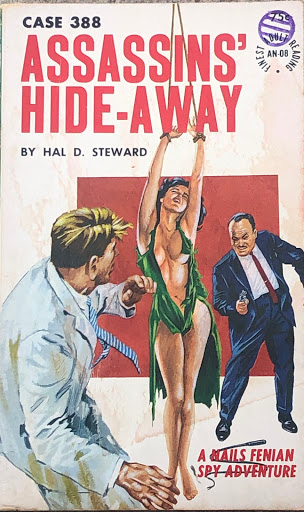 Hal D. Steward was a U.S. Army public relations superstar and later a successful newspaper reporter for for the Los Angeles Examiner and the San Diego Union who eventually became the executive editor of The Daily Chronicle in Centralia, Washington. He made some extra bucks writing graphic stories for True Detective magazine, including "Fatal Shootout for the Arizona Bank Robbers" in the July 1968 issue. His book output is all over the place with titles including Money Making Secrets of the Millionaires. With an interesting resume like that, I wanted to tackle Nails Fenian’s Case #388: Assassins’ Hide-Away from 1967 published by an obscure adult paperback imprint called Publishers Export Company.

First thing’s first: There weren’t 388 Nails Fenian books. There were only two. The other one was The Spy and the Pirate Queen also published in 1967. Our hero’s real name is Nailan Blackford Fenian, and he’s a CIA operative and part-time philosophy professor (trust me, just roll with it).

Here’s the set-up: The South American nation of Columbia has turned to the U.S. for help in thwarting Red China’s plan to spark a communist revolution with the help of Fidel Castro’s Cuba. The agency turns to Nails to smash the Reds’ operation and liquidate the bad guys off the face of the earth.

Upon arrival in Columbia, Nails promptly gets laid (this happens every 25 pages or so), and meets with his Columbian counterpart to get the lay of the land. It’s funny that the first few people he meets in Columbia insist on filling in Nails - and the reader - with fun facts regarding Columbia (elevations, average rainfall, geographical fun facts, etc.). I get the impression that the author wanted to ensure that his new set of World Book Encyclopedias would be fully tax-deductible as a business expense. The commie infiltration is in the city of Neiva (Population: 60,000, Altitude: 6,000 feet), so that’s where the bulk of the action transpires.

The enemy cell leader is Chinese Colonel Chow, and his sidekick is a German Nazi in exile famous for collecting the skulls of “Subhuman Jews.” There are also Columbian Communist Party operatives and Cubans as well. Adult spy fiction makes for strange bedfellows it seems, and this United Colors of Benetton ad is planning to amass a standing army to invade Bogota unless Nails can thwart their plans.

Upon arrival in Neiva, Nails liaisons with a female Columbian intel agent. And if by “liaisons” you think I mean “has sex with,” you’d be spot-on. Naturally, Colonel Chow learns that Nails is in Columbia to spoil the coup hootenanny, and sends a team of assassins to liquidate the CIA hero.

And so on. Assassins’ Hide-Away is a competent but by-the-numbers espionage adventure on-par with the lesser installments of the Nick Carter: Killmaster series. The sex scenes were clearly the product of a contractual obligation, much like the Longarm adult westerns. Steward’s writing was serviceable but never flashy. I’m not sorry at all that I read and reviewed the paperback. However, I’ve already forgotten most of the novel despite finishing it ten minutes ago. It’s a book not bad enough to hate but not good enough to leave a lasting impression.