God's Back was Turned 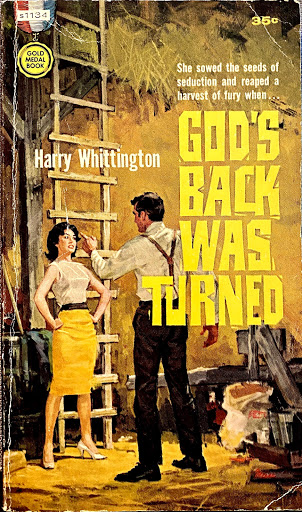 Here at Paperback Warrior, we continue to delve into the literary works of Harry Whittington. While some of his books have been reprinted by the likes of Stark House Press, Black Lizard and Prologue Crime, many of his published works remain completely out of print decades after their original publication date. I recently acquired God's Back was Turned, a 1961 Fawcett Gold Medal paperback written under Whittington's real name (not one of his many pseudonyms). The paperback has yet to be reprinted, so I needed to know if it’s a lost treasure. I quickly tugged the book out of it's sleeved home and began reading.

The book's setting should be a familiar one to Harry Whittington fans – central Florida. It's in this rural stretch of farm country where the backwoods, uneducated family of Cooks live. The father is a stern redneck farmer named Shack. His bone-headed family is a myriad of assorted personalities, each of them remaining close to a neanderthal state of grace.

There's the obese Sister Helen, a character that is described as the “fattest woman ever seen outside of a circus.” She plays the part of cook, maid and mother-figure to the family. Brother Calvin is a replica of his father Shack, a stubborn farm-hand who possesses the most rudimentary approach to life. Brother Jaime is mute, a disability that theoretically stems from his mother dying during his delivery. His inability to speak is linked to his guilt of “killing her by being born.” And then there's Brother Walter.

Brother Walter left home 12-years ago to become a traveling preacher. At the pinnacle of his success, Walter's various congregations reached into the tens of thousands. His pulpit soapbox testimony was the proud voice of a sinner who's reached a state of immortality (and immense wealth) due to God's good graces. To reinforce that Holy stature, Walter uses the old poisonous snake-handling trick. In doing so, he “faith heals” thousands of afflicted attendees. However, with every well-funded ministry crusade, there's a deep rooted scandal. After a Miami newspaper, backed by a committee on evangelical validity, condemns Walter's mission as a scam, the once wealthy religious superstar returns home. That's where the novel begins.

Brother Walter's reunion with the family doesn't go as expected. Instead, the newspaper declaring Walter's fall from grace is shown to his  father and siblings. Caught up in the joy of having Walter home in his shiny Cadillac, the family is awe-struck by Walter's picture in the paper. They are oblivious (or illiterate) to the fact that the entire article has waylaid their Brother Walter into financial distress and forced obscurity. Instead, they throw a grand party and declare that Walter has returned home to heal Jaime the mute. That's right, sham artist Walter is going to make his brother speak using the devout word of God. Walter, who fails to convince the family that his road show was a ruse for rubes, is forced to watch hundreds of cars descend onto the farm to witness the Greatest Miracle of their Lifetime.

While all of this is happening with the Cook family, Whittington also introduces two other characters that consume large portions of the narrative. The first is Tom Balscom, an old farmer who’s close friends with the Cooks. In fact, Tom's prior wife (wife number two for the box-score) was Sister Hazel, the oldest Cook daughter who ran away from Tom and disappeared forever. After frequenting a truck stop diner, Tom falls in love with a young waitress named Willie Ruth. In layman terms: Old farmer Tom falls in love with the hot, apron-wearing, very young waitress vixen named Willie Ruth. He brings Willie Ruth to the Cooks to show her off and is immediately scolded by Shack for marrying this sultry Goddess. While Willie Ruth prepares for her inevitable date with destiny – a marriage consummation on a creaky old bed with Old Farmer Tom – she starts making eyes with Jaime.

The other character is a black sharecropper named Lucian Henry. He's married with eight kids and is the proverbial “white hat good guy” of the story. Lucian just wants to whistle and plow fields with his best friend, a mule named Lisse. But, there's Miss Lovely, a gorgeous red-blooded, very white nymph that has a hankering for the help - a theme that Whittington explored later in his plantation sagas. Despite her father's scolding, Miss Lovely refuses to leave the help alone. The author's narrative is like a vice-grip, slowly sucking Lucian into a sexual vortex controlled by Miss Lovely. His path is simple: ignore her advances and keep working or give into his desires and then consequently face the obligatory torture and death by a very white lynch mob.

You can probably tell by this point that God's Back was Turned is a really fun book. It's clear that Harry Whittington's imagination was running buck-wild. The novel combines the author's love for a good love story, his sensual writing style, his experience with the Plantation Gothic genre and his forte of utilizing crime-noir tropes to tell a good story. I want to emphasize that this isn't a traditional crime-noir novel. Nor is it a romance novel. It's an unusual hybrid of styles that made Whittington so unique. Like a good Charles Williams swamp-nymph novel, Whittington's use of the rural landscape and its host of flavorful characters is a winning formula that is just so enjoyable. Harry Whittington was the king of the paperbacks for a reason. While this novel is expensive, it may be worth pursuing as a special treat for yourself. Don't turn your back on this one.