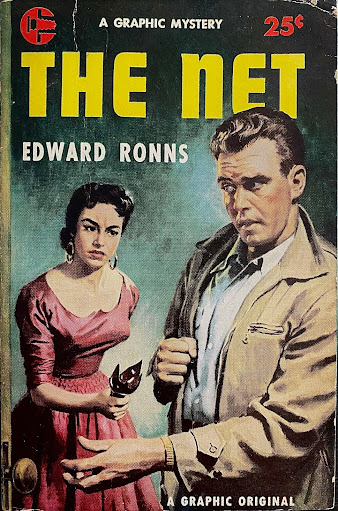 While mostly known for his Sam Durell (or Assignment) spy series, Edward Aarons authored over 30 crime-noir novels under pseudonyms including Paul Ayres and Edward Ronns. I've made it my mission to collect the author's work, particularly his crime-fiction paperbacks, but rarely ever read him. After my lukewarm appraisal of his 1947 mystery Terror in the Town, I've ditched the author for over two years now. Fully rehabilitated, I decided to read The Net. It was originally published by Graphic Mystery in 1953 under the name Edward Ronns.

Like the author's prior novels Death in a Lighthouse (1938), The Sinners (1953), Come Back, My Love (1953) and They All Ran Away (1955), The Net has a seaside or lakeside nautical theme. It seems to be a common thread weaving together Aarons' descriptive tales of mystery and murder. Like Terror in the Town (1947), the novel is set in a sleepy New England town where average people begin to do very bad things.

Watching the madness unfold is Barney, a prize fighter who receives a letter from his estranged brother Henry to return to Easterly, the brothers' hometown. It's there where Barney learns that Henry's fishing business is facing financial ruin. The catalyst is a man named Peter Hurd, a wealthy business magnate who has bought out the town's fishermen. As a final holdout, Henry is being bullied and stripped of resources and manpower. Upon Barney's arrival, Henry's ship is struck by an adversarial vessel in the dense fog. The casualties are two of Henry's longtime laborers.

As the narrative deepens, Aarons introduces a number of connecting plot threads. One is Barney's fight manager Gus and a $6K bet that Barney can knock off a top middle-weight contender. Barney's training and conditioning for the fight is mixed into a love triangle with his old flame Jo and a hothouse nymph named Lil. Once the body count reaches a surprising height, Barney is forced into a fugitive role as he digs into the killer's identity while staying ahead of a sheriff that's financially backed by Hurd.

I really enjoyed this tightly woven mystery. Despite having a number of revolving characters and plot devices, the narrative remains consistently plausible. Aarons is such a descriptive writer and paints the portrait of this seaside town incredibly well. The story's soundscape is the crashing of waves and ocean spray on the rocks, the creaking of the old schooners, the blaring of the fog horns and small town chatter of harbors, docks and fish. Visually, it's the foggy coast, the illumination of the lamplight on the dark waters and the sheen of brass locks on old discarded trunks. While it has the makings of a cozy New England mystery, the narrative is a more violent, hardboiled detective story as Barney delves into the town's history to unmask this brutal killer.

Shame on me for discarding Aarons after one subpar novel. I'm thankful I revisited this section of my shelves to discover an entertaining vintage thriller. The Net is an above average mystery that combines all of the crime-noir and hardboiled elements we know and love into a compelling and impressive quick read. There have been numerous reprints of the novel so please go hunt down a used copy. You won't be disappointed.