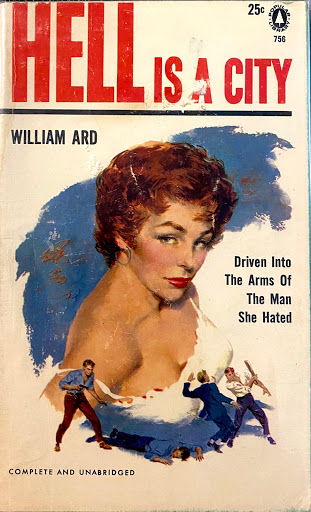 In his introduction to the Ramble House reprint of William Ard’s 1955 novel Hell Is a City, Francis M. Nevins makes a compelling case that the paperback is the finest installment in the popular ten-book series starring Manhattan Private Eye Timothy Dane. I’m also told that the series can be read in any order, so why not start with the best?

It’s ten days before the mayoral election in New York City. The polls indicate that corrupt mayor, Big George Kramer, is looking at a tough race against his challenger, the honest Manhattan District Attorney. The idea of losing the race is galling enough to the mayor, but the prospect of facing a subsequent investigation into his graft and embezzlement fills Big George with a special kind of terror.

Meanwhile, a disturbed young man kills a vice cop trying to engage in coercive sex with his virginal sister in a fleabag hotel. The scared siblings - Rita and Jamie - got away from the scene of the crime, but they know darn well that it’s only a matter of time before the cops catch up with them.

These two plot lines collide when the mayor decides to leverage sympathy for the dead cop to smear his anti-corruption opponent. Private eye Timothy Dane enters the scene after being engaged by a local muckraking newspaper to investigate the cop killing and poke holes in the mayor’s martyr narrative. Meanwhile, Rita and Jamie are on the run without knowing who they can trust.

Overall, Hell Is a City is pretty good, but I question those who say it’s Ard’s masterpiece. I enjoyed Wanted: Danny Fontaine and All I Can Get way more. The heroes of those novels are way more interesting and charismatic than Timothy Dane. Hell Is a City is a well-crafted bit of crime fiction, and you’ll probably enjoy it just fine. I just question how high it should be on your priority list. I think I probably got sucked in by the hype, and by that measure, the paperback under performed.