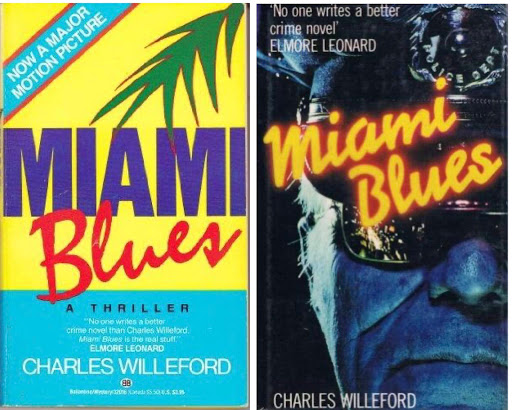 Beginning in 1953, the novels of Charles Willeford pushed crime fiction boundaries with his distinctive plots and genre-bending conventions. Thirty years later, Willeford concluded his career with his Hoke Moseley series of hardboiled noir thrillers, novels that would prove to be the author’s best-selling works. The series ended after four installments coinciding with his 1988 death. Willeford originally titled the first book Kiss Your Ass Goodbye, but the publisher insisted on the more benign title of Miami Blues for the 1984 release.

Miami Police Homicide Detective Hoke Moseley responds to an airport crime scene involving a dead Hare Krishna who bothered the wrong traveler and paid the price. We also meet Freddy Fenger Jr., a freshly-released ex-con ripped with muscle and responsible for killing the Hare Krishna. The story basically toggles between Hoke’s investigation and Freddy becoming an established resident of Miami with an expertise in strong-arm robberies.

The characters in Miami Blues are colorful and vivid. In Florida, Freddy quickly finds himself a girlfriend - a dimwit prostitute named Susan (professional name: “Pepper”), and watching their relationship quickly slide into dysfunction made for fascinating reading. As the orbits of Hoke and Freddy began occupying the same airspace, things become both violent and, at times, hilarious. Miami Blues isn’t a mystery at all but rather a propulsive thriller that sets up a violent confrontation at the novel’s climax and delivers the goods when the time is right.

There is a gritty and raw feel to Willeford’s early work that is replaced with a smooth readability of Miami Blues. It’s clear that the veteran author sought to emulate a quirky Elmore Leonard vibe, and Willeford achieves that goal with additional edginess, political incorrectness and hardboiled violence. Miami Blues far outshines Elmore Leonard’s Florida crime novels in quality despite the fact that Leonard made more money with his inferior products. Make no mistake, Willeford is the real deal.

In short, Miami Blues is one of the best books I’ve devoured this year. It’s a quick and breezy read, and I can’t wait to enjoy the rest of the series. Don’t sleep on this one. Highest recommendation.

In 1990, I saw the film adaptation of Miami Blues starring a young Alec Baldwin. I recall enjoying the movie although I remember nothing about it 30 years later. Despite this utter gap in my memory, I’m comfortable saying that the book is way better than the movie. It always is.