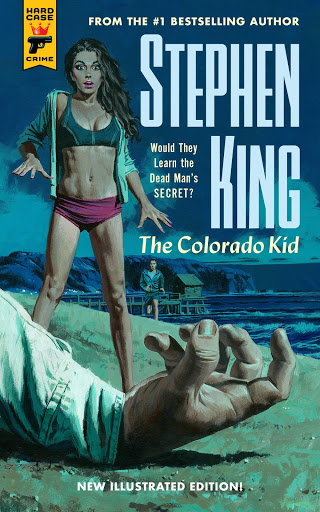 Like most of King's novels and short-stories, The Colorado Kid is set in a coastal Maine town, this one called Moose-Look. The author's narrative is fairly simple, three characters simply sit in a diner and talk about a mystery that has haunted the idyllic community for 25-years. The “Colorado Kid” is the nickname for a dead body that was found on the coast by two teens. The mysterious circumstances around his death is that the man seemingly appeared from parts unknown. No identity, no agenda, no murder. He simply died while eating.

While the narrative is rudimentary, King's signature storytelling makes it a compelling, pleasurable reading experience. In his conversational style, King makes you love these three characters with their witty charm and small-town mannerisms. Like any good crime-noir, there has to be an average character placed in extreme or unusual circumstances. That's the path the author takes only this character is dead. Learning how he arrived in this condition is a bit like the old locked-room puzzles. In fact, Stephen King's infatuation with Hard Case Crime comes from his love of crime-fiction, old mysteries and hardboiled novels. King name drops Rex Stout, Agatha Christie and even Murder She Wrote and dedicates the book to Dan J. Marlowe, an author King claims to be the “hardest of the hardboiled”.

The Colorado Kid is a quick, easy read but doesn't offer a traditional ending. Not to ruin it for you, but nothing is solved. It's the essence of the mystery, minus the mask being pulled from the killer's face. The novel would go on to loosely inspire the SyFy channel's television show Haven. Eight years later, Stephen King and Hard Case Crime collaborated again with Joyland, a superior novel that actually has an ending (although arguably not a very good one). At the time of this review, the publisher just announced a third King publication, an original novel called Later that is scheduled for March 2021.