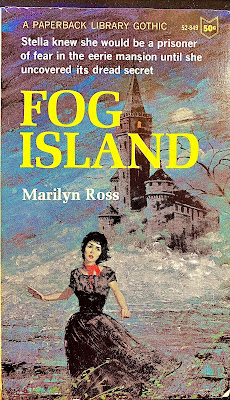 Canadian William Edward Daniel Ross (1912-1995) was a prolific author who wrote nearly 300 novels in his career. Specializing in multiple genres, Ross employed more than 20 aliases, including Tex Steele, Clarissa Ross, Dan Roberts and Ellen Randolph. His most popular alias was Marilyn Ross, a name he used to write over 30 novels related to the Dark Shadows television show. In addition, he used the name to author 54 stand-alone Gothic paperbacks as well as series titles like Birthstone Gothic and The Stewarts of Stormhaven. My first experience with Ross is his Gothic paperback book entitled Fog Island. It was published by the Paperback Library in 1965 and is the second episode in a series of seven stand-alones books simply called Fog Island. From what I can gather, none of these books are directly related to each other.

In the first chapters of the book, readers learn that the Trent family lives on the rural Fog Island, just off the coast of New Brunswick, Canada. Young Stella Trent has been invited by her distant grandmother Winifred to visit the island and possibly reside in the family's large Victorian-style mansion called Trent Towers. Stella's mother had a bad relationship with Winifred and was recently deceased. Her mother's estate is now transferred to Stella and Winifred hopes to reconnect with Stella.

Once Stella arrives and settles in the mansion, she is repeatedly attacked by what appears to be a ghostly apparition. To increase the tension, everyone she speaks with on the island warns her that the whole house is haunted and it stems from Trent Towers. While Stella is investigating, she finds out that her aunt and another man died together in a mysterious drowning incident. Everybody agrees that Stella bears a striking resemblance to the drowned woman. Will Stella experience the same fate?

Ross's story is a traditional Gothic tale that puts a woman at risk in what appears to be a supernatural event. The obligatory mansion is fun for the reader, and Stella, to explore. The novel wouldn't be complete without two dashing love interests, one of which may be a psychopath. Perhaps the most compelling part of the story is the guest house. An old family friend is doing medical experimentation there. Often Stella can see these experiments from her large window or in the illumination of the island's lighthouse. The mystery is whether or not her aunt actually drowned or is secretly held in this monstrous neighboring laboratory.

Some complain that Ross' writing seems interchangeable in all his books. I even read that some suggest that he copies full paragraphs of his Dark Shadows books and places them in his other Gothic novels. The question of whether all this is true is before the audience. I just have this book to judge and for a short, easy-to-follow Gothic novel, I really liked it. I'm looking for the rest of the books in this series, but they're all quite expensive. Based on the quality of Fog Island, it may be worth it.