The Secret of Haverly House 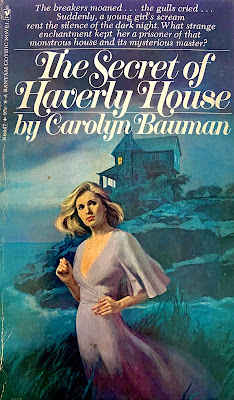 From the book notes, Carolyn Bauman was born in Oakland, California. After attending UCLA, she won many poetry awards and published short stories in a variety of magazines. Her only known novel was a gothic mystery titled The Secret of Haverly House. It was first published by Bantam in 1966 and then reprinted with different artwork by the same publisher in 1975.

Young, Heather Lane responds to a classified ad in a San Francisco newspaper. The ad asks for an assistant for a senior woman named Mulvina Haverly. After an interview with Mulvina's grandchild, Winston, Heather correctly pronounces the name of the house as Waverly House despite its printed name of Haverly House. Winston is impressed by this, along with Heather's background, credentials, and hires her. The opening pages of the book have Winston driving Heather along the winding roads to the seaside mansion known as Haverly House.

The vast mansion has 50 rooms, most of them unused. As a matter of fact, the whole left wing of the house is largely abandoned. A seemingly endless maze of corridors exists just for collecting dusty furniture. This is the wing that Winston's Aunt Julia resides in when she comes to visit her husband Calvin. Over the course of the introductory tour, Heather feels that Winston and Julia have been in a long-standing conflict and generally hate each other. Unfortunately, Winston places Heather's bedroom in this desolate left wing of the mansion.

As a 1960s gothic paperback, Haverly House has to be haunted. Heather often gets the impression that she's being watched. She feels a macabre presence in the hallways and often hears or sees signs that someone is lurking outside of her room. Of course, Winston disagrees along with a rather prudish family servant named Mrs. Anderson. This critique forces Heather in a state of doubt and uncertainty. Is she turning into a crazy psycho?

The Secret of Haverly House is another average gothic paperback surrounded by stacks and stacks of average gothic paperbacks. The market was saturated with these novels and the genre's enticing cover art never paused sales. There is nothing innovative or original about Bauman's story, but like a traditional spooky tale, it succeeds. There's a central mystery, a slight love interest and enough atmosphere draping everything in a misty haze. My only complaint is the amount of questions Heather asks herself throughout the narrative. The flood of rhetorical questions became a burden over the course of the book. Otherwise, it was enjoyable enough to stay in my collection.