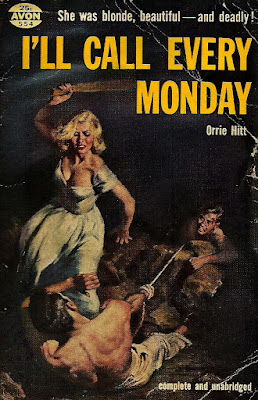 Orrie Hitt (1916-1975) was a suburban family man in Upstate New York who was quietly one of the most successful creators of sleaze paperbacks in the 1950s and 1960s. His plots were largely noir fiction with a heavy dash of non-graphic sexuality and bad decisions driven by greed and lust. During his life, he authored upwards of 150 novels before dying penniless. His second published book, 1953’s I’ll Call Every Monday, remains in-print today.

In the 1950s, the life insurance and annuity business was a different animal. Policies were sold by door-to-door salesmen who were also responsible for collecting the regular - often weekly - premiums from the customer. That’s the setup in I’ll Call Every Monday, and our narrator, Nicky Weaver, is a door-to-door cold canvasser and a premium collector in a town called Devans with a population of 15,000.

Early in the novel, Nicky meets two very different dames. The first is Sally. She’s a maid at the hotel Nicky occupies, but she wants to be a torch singer and nightclub hoochie-coochie girl. Anyway, Nicky is interested in her for all the normal reasons that guys get interested in cute babes. He eventually sets her up with a job at a cabin resort and a place to stay. It’s the beginning of a convenient sexual relationship, and Nicky really seems to like the arrangement.

The second woman is Mrs. Irene Schofield, a busty sexpot from the nice side of town who Nicky meets when canvassing a neighborhood to sell some policies. She has a forty-inch bust, and you just know she’s gonna be trouble from the first time she appears on the page. Nicky tries to resist her charms the best he can. After all, he’s got Sally holed up in a cabin not far away, and Irene is a married woman.

After relenting to his base instincts, Nicky quickly becomes a busy guy like any fella would juggling two dames. Mr. Schofield travels to New York every Monday, giving Nicky and Irene some alone time at her place. Meanwhile, he’s got pretty Sally waiting for him at the resort cabins. It’s a nice schedule until the idea of insuring and murdering Irene’s husband is raised. The plot then takes on similarities to James M. Cain’s Double Indemnity, but it’s still a lot of fun to read with a unique twist ending.