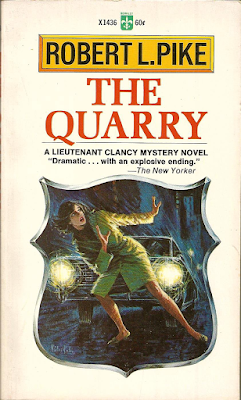 Mute Witness by Robert L. Fish (writing as Robert L. Pike) was adapted into the movie Bullitt starring Steve McQueen with significant deviations from the book’s original vision. The paperback’s sequel, The Quarry, is an exciting manhunt mystery from 1964 that remains in print today from Mysterious Press.

As the novel opens, NYPD’s 52nd Precinct Detective Lieutenant Clancy (no first name is ever provided) is informed that a recent four-man prison break from Sing-Sing includes Lenny Cervera, a hit-and-run car thief killer who vowed revenge when Lt. Clancy put him away three years ago. It’s Clancy’s job to catch Cervera before the escapee kills Clancy, the prosecutor and the sentencing judge, all things he vowed to do in court following his conviction.

Clancy commandeers a small army of police officers to help to find the fugitive and protect the presumptive vendetta targets. Coincidentally, the threatened prosecutor and the judge are both running against one another in a municipal judicial election, and neither are excited about being assigned 24/7 police protection. Clancy also dispatches surveillance teams to watch the houses of Cevera’s girlfriend and mother on the assumption that the escapee will be seeking help while out on the streets.

As the manhunt intensifies, a mystery develops: Why would a small-time punk like Cervera, serving a five-to-ten year sentence, risk a violent prison escape three years into his stretch? After all, he’d have a shot before the parole board soon enough, right? The mystery intensifies as the shots fly and the bodies pile up.

The Quarry is an excellent police procedural along the same lines as Ed McBain’s popular 87th Precinct series. Fish is a terrific writer who knows how to keep the pace moving with a sense of real urgency. He keeps the readers in the third-person head of Lt. Clancy, a fine protagonist, for the paperback’s duration. Although, the novel is a sequel to Mute Witness (or Bullitt, if you will), the two books stand alone nicely and can be read in any order with no supplemental materials needed.

Overall, it’s easy to like The Quarry, but readers should understand that this is a mystery novel (as advertised), not a violent adventure book. If you enjoy a good police procedural fugitive story with some clever twists, this one’s for you. Recommended.