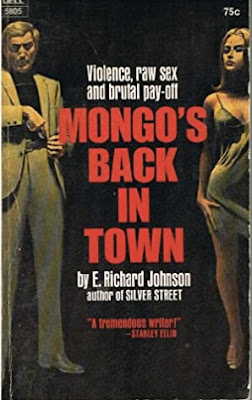 Emil Richard Johnson (1938-1997) authored 11 paperback original crime novels and won an Edgar Award while serving a 40-year sentence for murder and armed robbery in Stillwater State Prison in Minnesota. His 1969 novel, Mongo’s Back in Town, was the basis of a 1971 TV movie starring Joe Don Baker, Telly Savalas, Martin Sheen and Sally Field.

It’s Christmastime as Mongo Nash arrives home to an unnamed city on a Greyhound bus. However, this is no ordinary trip home after a six-year absence. You see, Mongo is a killer-for- hire, and he’s back to take care of a contract killing at the request of his brother, Mike. The brothers have a complicated relationship involving a bar and a girl that Mike arguably stole from Mongo. But when Mike needs someone whacked, he still calls his hitman brother to get the job done.

Mike needs Mongo to kill a thief and recover some stolen goods before the goods are due to the local mobster. Meanwhile, we have a federal agent in town named Gordon also looking for the same stolen items. Gordon spots Mongo visiting all the wrong people and assumes he’s mixed up with the shady deal. This sets up the compelling cat-and-mouse game that provides the meat of the paperback’s second half.

I know this sounds biased, but Johnson was an amazingly good writer for a guy in prison. His own favorite writers included Ed McBain and Mickey Spillane, but his plotting more resembles Elmore Leonard and Charles Willeford. The storytelling and pacing are flawless, and the characters are vivid and fully-realized for a 156-page paperback.

You need to be prepared for some graphic hardboiled violence as well as some retrograde attitudes toward women and sex. Mongo is not a nice guy, but you can appreciate his professionalism under the awkward familial circumstances. Prison was a good place for the author to study the mannerisms of hard case sadistic tough guys, and Mongo is clearly an amalgamation of scary men with a short fuse that Johnson likely encountered while incarcerated.

Mongo’s Back in Town is a great crime novel. I’m told it’s Johnson’s best work, but that’s not going to stop me from further exploring his body of work. Unfortunately, his books have been out of print for some time and can be a costly used purchase. Hopefully, some enterprising reprint house will take the initiative to revive Johnson’s books, and this lost classic would be a great place to start