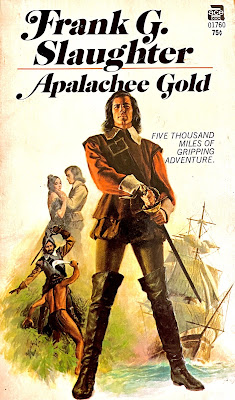 Frank G. Slaughter (1908-2001) is an alumnus of Duke and Johns Hopkins University. He became a successful surgeon in 1930, working first in Virginia before moving to Jacksonville, FL in 1934. In 1946, Slaughter exchanged his scalpel for a typewriter and became a full-time novelist. Throughout his career, Slaughter has written 62 books and achieved sales of over 60 million copies. Though most of Slaughter's novels are medical fiction, he has many biblical and historical novels. His 1954 Ace paperback, Apalachee Gold, is an adventure novel based on a little known historical event in Florida known as the De Vaca Expedition.

The protagonist in the book is the young Spaniard Pedro Morales. Pedro is the clerk of an arrogant Spanish conquistador called De Narvaez. Pedro's uncle, De Vaca, holds a position of treasurer. In 1527, the governor of Cuba ordered De Narvaez to employ a fleet of five vessels and 400 men to the coast of the Gulf of Florida in search of gold. Both Pedro and his uncle joined this expedition. These boats ended up being separated or damaged by severe storms. However, the heart of the story involves Pedro and an enslaved Moor named Estevanico.

After finding various Indian tribes in western Florida, Pedro and Estevanico began to learn how to hunt and fight as well as identify all edible plants. The adventure duo quarrel with a number of Indians and even some of De Narvaez's men. Slaughter's narrative, loosely based on real accounts, has both men captured by Indians and placed in extreme circumstances.

The two explorers ended up struggling and negotiating their way to the Mississippi River. It's here they navigate into Texas and what is now Corpus Christi Bay. Pedro develops a romantic interest and Estevanico struggles for his own freedom. The finale of the book has the two men, paired with De Vaca, trying to free the Indians from Spanish soldiers.

I have a penchant for early pioneer novels and this certainly fits that sub-genre. While it's not really a western, it still possesses that pioneering lifestyle that makes this genre so interesting to me. I liked these two main characters, the history of our nation at that time and from a Christian standpoint I liked the spiritual messages throughout. It is a great testament to faith. However, as a product of its time, there is an antiquated ideology concerning the Indians. Like anything historical, just take what you can gain from it and disregard some of the older sub-texts. If you can do that, Apalachee Gold is a solid read.