The Survivalist #03 - The Quest 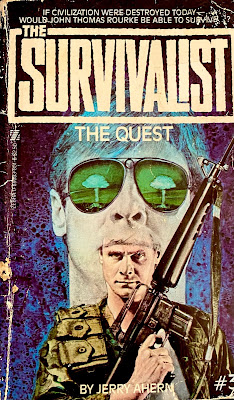 Jerry Ahern's The Survivalist is one of the most popular post-apocalyptic titles of the 1980s. The literary series lasted between 1981 and 1991, totaling 29 volumes. In 2013, the series began new installments authored by Bob Anderson and Sharon Ahern. After reading the first two volumes, I like the character of John Rourke a lot. I'm compelled to learn more about his journey through Soviet-occupied America. This third novel, The Quest, was published by Zebra in 1981 and features Rourke in his home state of Georgia.

There are a number of scenarios that weave together in The Quest. After arriving in Georgia, Rourke leaves Rubinstein at his survival retreat as he explores the area in search of Sarah and the children. After a brief skirmish, Rourke receives a proposal from a former fellow soldier named Bradley. He asks Rourke if he is willing to help find a NASA scientist. In exchange, Bradley will send a correspondence through the resistance network inquiring where Sarah is.

During this time, KGB commander Vladmir Karamatsov visits his wife Natalia in Chicago. In the series second installment, a friendship was formed between Natalia and Rourke. Karamatsov knows this and starts physically and verbally abusing Natalia. In her defense, she injures Karamatsov and runs away from the house. Later, Natalia's father, General Ishmael Varakov, learns of Karamatsov's attack. Varakov wants to get in touch with Rourke, an enemy of the state, to kill Karamatsov. His reward will be complete liberty to him and his family.

By all accounts, Rourke is an extremely busy character in The Quest. By assisting Bradley, Rourke becomes involved in a local resistance operation that eventually loses. Through his exchange with Varakov, the last exciting chapters of the book relate Rourke's mission to kill Varakov.

This series installment is important because it introduces the Eden Project storyline. This will become a major consideration in the series in the future. The involvement of NASA before the nuclear attack, the ultimate goal of the project and its end result constitute a large part of the future narrative. But for now, The Survivalist is a lot of fun and this is just another great chapter in the long storyline. I would recommend you read them in numerical order.