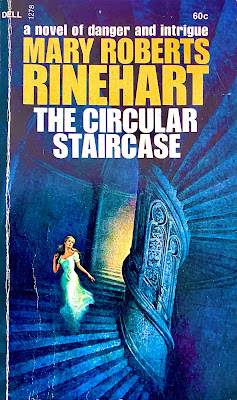 I recently became fascinated with the American mystery writer Mary Roberts Rinehart. She wrote several novels and short stories between 1908 and 1952. Much of it has been reprinted dozens of times over the years. In the 1960s and 1970s, Dell reprinted her novels to appeal to the flourishing Gothic market. These books traditionally featured women escaping large mansions or walking down dark corridors and stairs. Such is the case with Rinehart's very first novel, The Circular Staircase. It was originally published over the course of five issues of All-Story beginning in November 1907. It was then reprinted as a book by Bobbs-Merrill in 1908. It was reprinted and commercialized like a Gothic paperback by Dell in 1968.

Rachel Innes is a wealthy spinster who has raised her orphaned niece, 24-yr old Gertrude, and her nephew, 20-yr old Halsey. After hiring a team of contractors to renovate her home, Rachel decides to rent a big manor called Summerside for the trio to spend their summer vacation. Arriving early, Rachel and her servant Liddy decide to spend the night at home until Gertrude and Halsey arrive the following day. The duo experience what appears to be a supernatural haunting with loud foot stomps down the house's long and winding staircase. In addition, a man appeared to be outside in the shadows of the stable. The explanation for all of this comes from the butler who cautions the duo by explaining that things have happened inside that are not natural.

Later, Gertrude and Halsey arrive home with a friend and head off to the local country club. That night, the house is awoken by the noise of a gunshot. Stumbling into the card room, Rachel discovers the corpse of Paul Armstrong, the homeowner's son. By the time the detectives get here, there's every indication that Halsey is the prime suspect in Armstrong's murder.

Rinehart's story is written in what was then thought to be an innovative style. In the first pages of the book, Rachel tells readers what happened to her and her family in Sunnyside. She does this in a method that introduces the "If I had only known then." This technique becomes a staple in mystery fiction with the protagonist cautioning readers about the events that happened and the things that he or she could have done to avoid it. This is like an NFL fan commenting Monday morning on his team's defeat the day before. It is made in a way that presents itself as a regret or a misfortune, but that sets up the central mystery of the book.

The Circular Staircase features a fascinating narrative that unfolds into 10 or 12 small mysteries that are all connected. Rachel's experience at Sunnyside is a harrowing journey, ripe with two murders, a local bank robbery, a mysterious orphaned child and a number of seeming unexplained occurrences within the house. A large hole appears in an upstairs wall, an unknown person (or entity) is discovered escaping through a laundry chute and various members of the family find themselves physically and mentally assaulted. Sometimes I found the plot really complicated and dense, but it wasn't enough to make it an unpleasant reading experience. Instead, I enjoyed the overwhelming mystery and was excited to discover how the author weaved it all together.

Rinehart's novel was successfully adapted into the 1920 stage play The Bat. It ran 878 performances in New York before launching in Europe. It was filmed on three occasions: 1926, 1930 and 1959. Against Rinehart's wishes, a film company reprinted The Circular Staircase under the title of The Bat. In 1926, Rinehart allowed a novelization of The Bat in her name but ghostwritten by Stephen Vincent Benet.

If you like the cozy mystery thrillers of the early twentieth century, The Circular Staircase is a must-read. Rinehart was a master of her craft and used a lot of the same techniques, atmosphere and locales write a number of other novels including 1925's The Red Lamp. You owe it to yourself to read a few of her books.