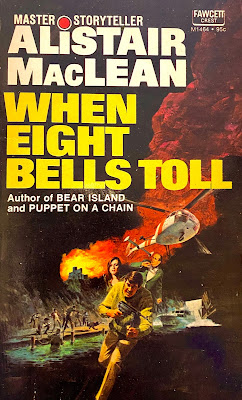 The mid-1960s may be the best period for adventure writer Alistair MacLean. From 1963, the Scottish native released Ice Station Zebra, When Eight Bells Toll and Where Eagles Dare within three years. The three novels also became successful film adaptations featuring such leading men as Rock Hudson, Richard Burton, Clint Eastwood and Anthony Hopkins. Having read and enjoyed Where Eagles Dare, I wanted to acquire more novels by MacLean. I decided on When Eight Bells Toll. It was originally published in hardback and as a Fawcett Gold Medal paperback.

When Eight Bells Toll is presented as a first-person account by a character named Phillip Calvert. He works for the British Secret Service and his direct report is Rear-Admiral Sir Arthur Arnford-Jason, which thankfully is shortened to the nickname Uncle Arthur for the bulk of the book's narrative. After several cargo ships were hijacked in the Irish Sea, Calvert is sent undercover to investigate.

As the narrative unfolds, readers realize that secret service agents were planted on these ships because of the cargo - millions of gold bullion. Calvert and his partner Hunslett explore Scotland's Torbay Island in the guise of marine biologists. There's a number of suspicious characters, including a wealthy Lord, a former actress and a shipping magnate. While Calvert is getting closer to the hijackers, he finds himself a target.

MacLean's story is unlike high adventure novels like Where Eagles Dare and The Guns of Navarone. In fact, I'd label When Eight Bells Toll a detective novel with adventure tendencies. The story follows a private detective formula with inquiries, interviews, shady ladies and mysterious characters. There are a lot of shootouts, underwater adventures and nautical nuances to turn it into a real page turner. Calvert is a likeable hero and the support casting was diversified enough to add a lot of twists.

Whether you like gumshoe crime novels or nautical adventure, When Eight Bells Toll will appeal to you. Alistair MacLean's career reached a production peak at this point in his career, and this is just another chapter in his remarkable talent as a storyteller. Read it now, please.