Do Evil in Return 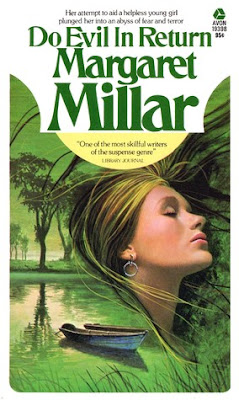 Margaret Ellis Millar (born Margaret Ellis Sturm, 1915-1994) was a mystery writer originally from Ontario, Canada. In 1938, Margaret married Kenneth Millar, the author who used the pseudonym Ross Macdonald to create and write the bestselling Lew Archer character. Margaret Millar authored over 25 novels, including series titles like Paul Pry, Inspector Sands and Tom Aragon. My first experience with Millar is her 1950 Dell paperback Do Evil in Return. In 2006, Stark House Press reprinted the book as a double along with the author's 1957 novel An Air That Kills.

Charlotte Keating is a private-practicing physician who lives and works in a small town in the Pacific Northwest. One evening before close she receives a young woman named Violet. Desperate for help, Violet tells Charlotte that she is a married woman from Oregon who had an affair with a married man and is now four months pregnant. The purpose of her visit is to request Charlotte to perform an abortion. Charlotte rejects and explains that the term of pregnancy is too advanced while reminding Violet that abortions are illegal. Charlotte learns that Violet rents a one-bedroom apartment in town. While offering to bring her there, Violet runs away.

Afterwards, readers learn about Charlotte's emotional problems. She has an extended relationship with a married man named Lewis. Her mental barriers are thick with a sense of insecurity, self-doubt and vulnerability. She wants Lewis to divorce his spouse or just have the internal fortitude to end their own long affair. With all of these underlining conditions, Charlotte somehow feels as if she has failed Violet.

On the other side of the city, Charlotte speaks with one of Violet's neighbors and has the impression that they are not pleasant people. After her visit, Charlotte shockingly learns that Violet’s body has washed ashore and all signs point to a suicidal drowning as the cause of death.

Charlotte's brief participation in the young lady's life has now become rather dangerous and complex. Violet’s violent uncle and conniving husband break into Charlotte’s house and attempt to extort her for money. She refuses and things quickly become grim when a skeptical police detective starts asking questions about Charlotte's role in Violet's suicide. When Violet's husband and uncle are discovered with bullet holes in the head, Charlotte finds herself in a whirling nightmare.

Millar's plot was structured as a suspenseful mystery with a handful of characters who might have turned out to be a killer. I liked the author's inclusion of extramarital affairs and the way these characters viewed themselves and their marriages. Except for Charlotte, nearly all the characters were married and had difficult relationships. Millar’s unmarried characters "survive" the ordeal. It seems to me that Millar's suggestion is that two people can find independent happiness.

While Millar is considered a mystery writer, I also like to think of Do Evil in Return as a stylish crime-noir. It has some detective procedural elements, the concept of an average citizen thrust into extreme circumstances and the alarming idea that an innocent person could find themselves guilty of a crime they didn't commit. These are all genre tropes that adapt uniformly to most of these crime novels of the mid-20th century. As a short read, I found it to be an entertaining experience.

Note: There is an informative biography HERE that discusses Millar’s fascinating life, influences and her superb writing style.