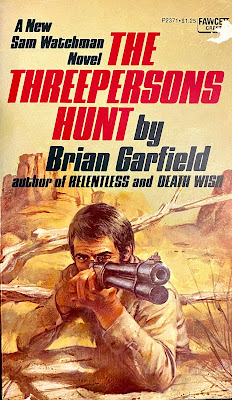 Brian Garfield (1939-2018) wrote westerns throughout the 1960's. Beginning in the early 1970s, the author began writing crime-fiction, highlighted by Death Wish in 1972, I loved his 1972 thriller Relentless, featuring Sam Watchman, an Arizona state police officer. Luckily, Garfield revisited the character with his 1974 novel The Threepersons Hunt. I purchased the Fawcett Gold Medal paperback edition hoping for the same reading pleasure as Relentless.

Watchman is a Navajo and has been working as a State Trooper for a decade. He has a strong track record but has not been promoted. His curiosity is peaked when his direct supervisor offers him a special assignment. A prisoner named Joe Threepersons escaped from prison and is suspected of returning to his Apache Reserve. The agreement is that Watchman will be assigned a temporary detective role that can potentially shift to a full-time role if he can successfully retrieve the prisoner. Simple, right? The problem is that Watchman and Threepersons come from two different Indian tribes. Historically, Navajo and Apache do not mix well. As such, the work may become very dangerous for Watchman.

Threepersons originally went to prison for a murder he happily confessed to. His wife and young son profited financially from his captivity by receiving substantial sums of money. These funds were used to invest in a business and the child's future expenditures at college. Did Threepersons take the fall so his family could become financially independent? Before Threepersons escaped from prison, he learned that his wife and son were killed in a car accident. Watchman's pursuit of Threepersons evolves into an elaborate murder investigation.

The placement of Sam Watchman in this big investigation is different from the high-action formula of Relentless. I love both books, but I think Watchman is more in his element with the procedural style story. There are many shootings and action to satisfy the readers, but I really enjoyed the complex mystery. Central to the story is a legal battle between the Indians and a large cattle ranch belonging to a businessman with close ties to Threepersons. Garfield's characters reflect greed, deadly intent, sexual desire, poverty and revenge. There are plenty of characters, but that's not enough to make the plot dense or confusing.

In some respects, Watchman is like Craig Johnson's Longmire character. Both are astute with a penchant for solving issues with logic and proof. Still, the two are capable of holding their own when it comes to the inevitable struggle. I also compare Watchman with the Dakota character of Gilbert Ralston. It could be the rural rocky areas or the interaction among the Native American tribes. I wanted Garfield to follow up on a third novel starring Sam Watchman. I think there was so much potential with that character. Regardless, The Three Persons Hunt is a real pleasure to read. Highly recommended.