The Woman is Mine 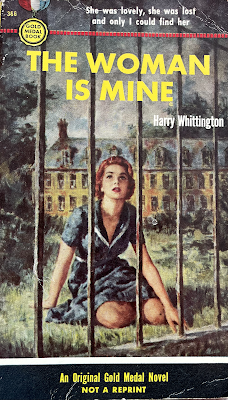 Harry Whittington preferred to sell his novels to Fawcett Gold Medal because the paperback imprint paid more and sold more units than rival publishers. As a result, his best works were published with the telltale yellow spines, including his 1954 thriller, The Woman is Mine.

Minnesotan Jeff Patterson is on vacation alone on a Florida beach unwinding after an Army stint in Korea. The single woman in the next cabana has been catching his eye. His first attempt to chat her up lands with a thud. The woman actually seemed terrified and guarded. Later that night, she attempts suicide only to be saved by Jeff. What gives with this girl?

Back at Jeff’s cabana, he doesn’t get much information from her other than her name is Paula and someone is out to get her. Just as she lets her guard down and decides to share her story with Jeff, men with a warrant arrive to take her away. The man at the door explains that he’s a psychiatrist, and the girl’s name is really Mrs. Joyce Glisdale. He explains that she’s a delusional paranoiac requiring sedation and a forcible return to the psychiatric facility from which she escaped. Before Jeff can discern the truth, the men are gone with Paula/Joyce in custody.

This is one of the best setups, I can recall for a 1950s suspense thriller. Someone isn’t telling the truth here. Is she really a lunatic named Joyce or a scared victim named Paula being kidnapped by weird dudes? For his part, Jeff is smitten and sets out to find out the truth about Paula/Joyce and the mysterious sanitarium where they are holding her. The more he snoops around, the fishier the shrink’s story seems.

Jeff’s amateur sleuthing is a total pleasure to follow. Every step closer to the truth opens a new door that begs several other questions. The novel recalled the popular movies by Alfred Hitchcock, and the suspicious and guarded sanitarium reminded me of Dennis Lehane’s Shutter Island. All of this leads to a revelatory conclusion that ties up the mysteries in a creative and satisfying manner.

The Woman is Mine is one of the finest Harry Whittington novels I’ve read and I’m baffled why the literary arms race to reprint Whittington’s greatest hits has left this paperback behind. With a bit of searching and know-how, used copies from 1954 are available from online sellers of vintage paperbacks. This one is worth the effort and expense. Recommended.