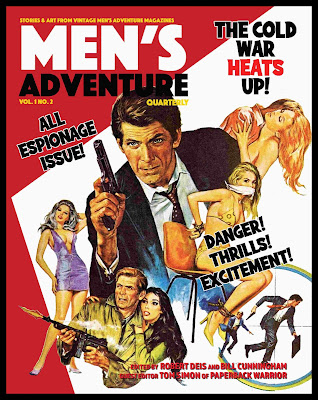 Earlier in the year, Men's Adventure Quarterly made its debut. The concept is to bring back the style and substance of action-adventure magazines for men (MAMs), those tough-guy magazines that prospered after the pulp magazines lost their appeal. The first issue of Men's Adventure Quarterly, edited by Robert Deis and Bill Cunningham (also graphic design), focused on western literature and artwork and included a number of reprinted stories from vintage MAMs. It was with great joy to receive this brand new issue, which has an espionage theme similar to Ian Fleming's James Bond. In addition, it features a guest introduction by Paperback Warrior's very own scholar, Tom Simon. So that alone is worth the price of admission.

Men's Adventure Quarterly features artwork by the legendary Mort Kunstler as well as well-known peers like Walter Popp, Basil Gogos and Gil Cohen. This issue includes seven spy stories, a special showcase of artwork from classic MAMs, introductions by Deis and Cunningham, and a photographic look at the popular female spy craze.

We like colorful illustrations, but our meat and potatoes here at Paperback Warrior are fiction reviews. I had the opportunity to read the issue cover to cover and here are capsule reviews of a couple of included stories:

The Deadly Spy Mystery Of The Formosa Joy Girls

This story first appeared in the March 1963 issue of Man's Action and features interior art by artist Basil Gogos. The author is an unknown name in Brand Hollister. The reason is because of the often used MAM marketing gimmick of these authors pretending to be retired spies who are forced to use pen names to preserve their own safety. In this story, Hollister and his partner Mastin are employed as US counter-intelligence agents. They both work to determine who is divulging information from Formosa (a former island of Taiwan) into Red China. As Hollister's story unfolds, the leak in U.S. intelligence is stemming from Madam Fu-Ming's strip club. There are a few shootings and a mystery to make the story stand out. Overall, I really enjoyed this short story of espionage.

The Kremlin Agent Will Be Wearing A Pink Nightgown

Martin Fass wrote short stories for MAMs while also contributing to the daily Nero Wolfe newspaper comic strip. This Fass story was first featured in the October 1961 issue of Male. A two-page illustration by Walter Popp follows the narrative. The story uses another popular marketing trick from the period when the writer receives first-hand information from a spy or law enforcement member. Typically blue-collar males swallowed it hook, line and sinker due to the bogus photos showing the "real" person passing the story to the author. The story unfolds in Germany and features a beautiful woman named Magda Karoli working for Major Mancuso in a US. counter-intelligence agency. While Mancuso is away at meetings, Magda bugs his office in hopes of obtaining valuable intelligence reports that she can provide a Hungarian spy ring that serves the Soviet Union. As leaks occur frequently, Fass's story concentrates on Mancuso's robust investigation. I thought this was the best story that Deiss and Cunningham chose for this issue. I liked the interaction between Magda and Mancuso and the tension that moves slowly as the noose tightens on this network of spies. Kudos for the superb ending with Magda seducing her way through another bureaucracy.

With 157 full-color pages, Men's Adventure Quarterly Issue 2 is another big success. Like Deis's other contributions (Barbarians on Bikes, Cuba: Sugar, Sex, and Slaughter, Cryptozoologoy Anthology), the book is stacked with vintage stories, stunning artwork and a real sense of purpose. The magazine honors the men and women that contributed consistently to the Men's Action-Adventure Magazines that populated store shelves in the mid-20th century. Deis and Cunningham's hot-blooded passion for this style of storytelling is exhibited through their hard work and steadfast dedication to the art form. Raise your glasses high in appreciation. Or, better yet, go purchase a copy and support their latest effort.

Buy a copy of this magazine HERE