Fresh Fiancés for the Devil’s Daughter 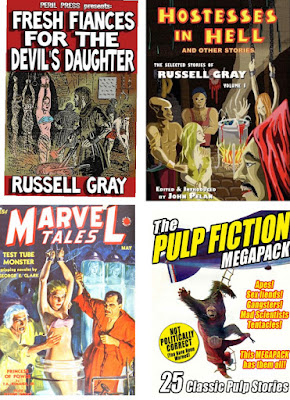 Before there was a term for “Extreme Horror” or “Splatterpunk” with amplified gore and violence, a man writing as Russell Gray was shocking and revolting readers with his graphic horror stories and novellas in the pulps. Gray was a pseudonym of author Bruno Fischer, and his most famous horror work was “Fresh Fiancés for the Devil’s Daughter,” originally from the May 1940 issue of Marvel Tales.

The story begins at a crowded and drunken literary party in a Manhattan apartment. Our narrator is literary agent Lester Marlin, and he can’t keep his eyes off a woman who just entered the party. She introduces herself as Tala Mag, and Lester is somehow able to fend off her wanton advances by citing his wife’s presence at the party.

The next morning Lester receives a note from the party’s hostess (his best client) asking him to meet with Tala Mag as she is an aspiring author in search of representation. A second note from Tala requests Lester to come to her Park Avenue penthouse later that day for the meeting. Despite his misgivings, he agrees to meet with Tala to appease his client.

At the meeting, Tala is in full seduction mode demanding that he read a story she wrote. Lester reads her manuscript, and it’s dark, vile, evil and unprintable. However, Tala is not the kind of lady who takes no for an answer. As he tries to escape her apartment, Lester is subdued, rendered unconscious, and later awakens naked and bound by chains inside Tala’s “room of torment.”

Beyond that, I don’t want to give much away. However, if you’re seeking a violent and kinky fantasy gone awry, this is the story for you. The torture story becomes a revenge story with an expanded cast of victims, sizzling breasts and a “most dangerous game” gimmick. Bruno Fischer is clearly having some fun pitting an author against a literary agent in a battle sparked by the rejection of the exact kind of story that Fischer himself wrote as Russell Gray.

The 38-page novella began its life in the May 1940 issue of Marvel Tales and has been reprinted in anthologies several times over the past 71 years. If you don’t have $300 to buy the original pulp magazine, you can find the story in any of the following books: