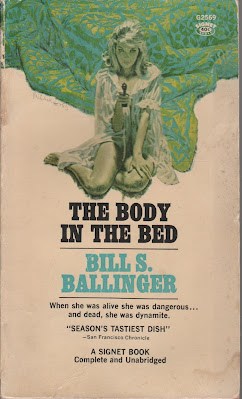 Born William Sanborn Ballinger, Bill S. Ballinger (1912-1980) wrote over 150 teleplays including episodes of The Outer Limits, Alfred Hitchcock Presents and Ironside. With most of his career spent in radio and television, Ballinger still found the opportunity to author nearly 30 novels. His first, The Body in the Bed, was published in 1948 and is the first of two books starring a Chicago detective named Barr Breed. As a lifelong Cubs fan, I couldn't resist the idea of a crime novel in Chi-Town.

Although the sign on his door reads Breed Detective Agency, Barr Breed isn't your typical private-eye. Instead, he runs a detective staffing agency that furnishes guards for warehouses and banks, detectives for railroads, secret shoppers for stores and payroll protection for long routes. So the last thing Breed wants is a murder case. But, when a guy named Gibbs knocks on his door, Breed becomes enthralled with his story.

Gibbs explains that he's been cheating on his wife for a number of years. As a commercial account executive, Gibbs is in and out of hotels all over the country. In Chicago, Gibbs has a main squeeze named MacCormick. Unfortunately, while Gibbs was in the shower, someone walked in, strangled her to death and then tucked her into bed. Gibbs discovers the dead broad and makes a beeline for a detective agency to figure this out. Breed doesn't buy in right away, but when Gibbs produces a wad of bills, Breed makes him this deal: The money will buy Gibbs seven days. During that seven day stretch, Gibbs needs to lie low and allow Breed to find someone else to be a suspect for the cops. Gibbs accepts the deal and takes a point-blank shotgun blast to the chest later that night. Later, Gibbs' own wife is found murdered as well. Who knocked-off this love triangle and what's Breed's commitment to the case? That's the main premise behind The Body in the Bed.

Honestly, I didn't particularly like Breed during the novel's first half. But as the story-line began to tighten, I changed my tune - he's a real badass. He fights hard, escapes from killers, endures some torture, is an excellent shooter and a real cool cat with the ladies. He's not a dimwit, but he does allow the problems to solve themselves. He does some sarcastic wisecracking and always seems to describe in great detail what he's eating and drinking. As a crime-fiction mystery, the novel works really well with a payoff finally coming at the very end. I was glued to the characters just trying to figure it all out.

Ballinger writes this in the first-person as Breed relays his experiences to readers. After the book's sequel, The Body Beautiful, the author changed his writing style to incorporate shifting first-person narrators from the various characters' perspectives. This sort of bobbling could make readers seasick, but I'm willing to test the waters. I haven't seen the last of Bill S. Ballinger.