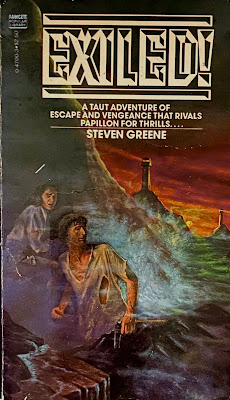 John Lutz (1939-2021) was a critically-acclaimed crime-fiction author who wrote a number of private-eye series titles as well as a dozen stand-alone novels. He served as president of The Mystery Writers of America as well as Private Eye Writers of America. My first experience with Lutz is a 1982 Fawcett Gold Medal paperback titled Exiled!.

The author name on the paperback’s cover is Steven Greene. Research suggests that Lutz either wrote the whole novel himself or collaborated with another author named Steven Greene. Evidence suggests that Greene was a real author who co-wrote the 1982 Signet novel Sleeping Beauties, a Robin Cook-styled medical thriller written as L.L. Greene that seems to be a collaboration between Steven Greene and Larry Levine. Lutz's official website lists the novel as “with and as by Steven Greene.” We may never know the full truth.

The novel's prologue sets the scene: a heightened level of violence in America has plagued the nation. Due to this overwhelming murder statistic, the U.S. government has created a penal colony called Pen Island. If a brochure existed illustrating it's uniqueness, it might read something like this:

Pen Island lies 100-miles off of the beautiful Pacific-Northwest Coast. At three-square miles, this lush island is populated by wildlife, plants and edible crops. The entire retreat is surrounded by shore towers that closely monitor all incoming and outgoing traffic from the island. A highly efficient security system automatically terminates any unauthorized personnel within the island's surrounding waters or in the air. Nestled within Pen Island's beautiful landscape are it's diverse residents – a unique population made up of over 1,000 convicted murderers. If your destination is Pen Island, you'll enjoy complete freedom from any law-enforcement, social barriers or pesky government employees. Pen Island is the ultimate getaway. Relax, work, make love or...murder!

In the book's opening pages, Dan Hopper is working in a small coastal town in Maine. It's here that his days are spent managing his small cabin retreat while fishing for lobster. When Dan rescues an abused stripper named Annie and her son Billie, his freewheeling existence evolves into a tight-knit family dynamic. However, the happiness is short-lived when the Hopper family is attacked by mobsters. In a grizzly chapter, Dan is forced to watch Billie brutally beaten to death. After a horrendous assault on Annie, Dan is injected with a syringe and falls asleep as the cabin is set on fire.

Dan awakens to find himself transported from Maine to the shores of Pen Island. Upon arrival, Dan is welcomed by the islanders and explained the rules. A) There's no discussion of escape at any time. Escape attempts lead to death and the idea of freedom just deflates the island's morale. B) Dan has his own hut but must collectively work with the group to grow crops, distribute water and generally become a “team player'. C) There's 900 men and only 72 women on the island. The women are required to take turns spending a week at the compound where men (and the women) can sexually release their tensions. This deters traditional rape.

After settling in, adapting to the change and overcoming the shock of witnessing his family's assassination, Dan begins formulating a plan to escape the island. His need to break away is driven by his quest for vengeance. Who set him up to be a prisoner? In order to adapt to the island, Dan has to circumvent being killed by one of the homicidal maniacs as well as learning who is really in charge. Like any prison, there's an inmate leader. In this case, it's a high-level mobster named Martindale and his enforcer, a brutal maniac named Chinko. Dan's inevitable showdown with them directly relates to his escape attempts. To reach freedom, he'll not only need to escape the island but also Martindale's clutches.

Exiled! is one of the better books I've read in a long time. This novel is just outstanding in its primitive, neanderthal display of human violence and man's complacency with it. In some ways the book formulates a Christian Christ-like pattern. A “perfect man” (Dan) is sent to a hostile world to save it. The book's overall premise is riveting and unique. Mixed into the narrative is also a brutal sporting event called The Games, a mix of rugby, football and fighting. These games help push the narrative along while still constructing alliances and escape plans. It's an exhilarating plot point that adds combative aspects to the book's presentation. There's also a fleeting romantic feel as Dan comes to the aid of not only Annie, but also a woman named Mirriam on the island. The book's closing chapters were fulfilling, but not terribly surprising. There's another aspect to the narrative that I won't reveal here, but it definitely adds a dynamic feel to the island story. It's these portions of the book that allow readers to leave the island periodically.

Whether Lutz or Greene or both authored Exile!, the end result is just a fantastic action-adventure novel with crime-noir tendencies. Used copies seem abundantly available and I encourage you to track this book down. It's well worth your investment and time. Highest possible recommendation!