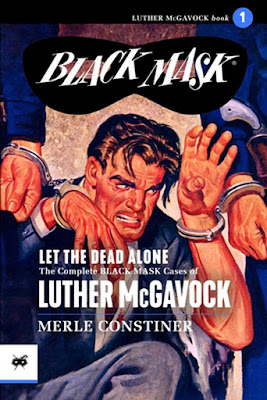 Merle Constiner (1901-1979) had success as an author of mysteries and westerns for both the pulps and the paperback original era. His Luther McGavock series was about a Memphis-based private eye who solved mysteries in the Deep South in several 80-page novellas originally appearing in Black Mask Magazine and existing today as reprints. His first adventure was “Let the Dead Alone” from 1942.

Luther McGavock is not a likable guy. In fact, he’s one of those guys that people instantly dislike out of pure instinct. His sucky personality and demeanor have cost him a lot of jobs, and he was employed at nearly every major private investigative firm in America before landing at his current one in Memphis. For that reason, Luther generally works alone.

His current assignment is an emergency job for his boss. The chief’s cousin - a man named Malcom Jarrel - has gotten himself in a mess in a small hill-town called Bartonville on the Mississippi-Tennessee border. The details are sketchy, so the boss sends Luther on a bus to find out what’s happening and make things right.

Upon meeting Cousin Malcom, he explains that someone dumped the corpse of the town’s recluse on Malcolm’s lawn. For his part, Malcom covered the dead body with straw, called his cousin in Memphis, and waited for Luther to arrive. When Luther examines the body, he sees that a roofing nail has been driven through the skull penetrating the dead man’s brain. Luther encourages Malcom to loop in the police while Luther sniffs around town for leads.

Luther’s clutch investigative technique reminds me of Gregory McDonald’s Fletch. He puts on the exact fake persona he believes would have the greatest likelihood of eliciting the information he’s seeking. This makes for a fun and unpredictable read as Luther hops from one bluff to the next. Moreover, Contstiner’s atmospheric description of the life and people of the Deep South seems remarkably vivid - particularly from an author who called Ohio home for most of his life.

The problem with “Let the Dead Alone” is the same problem I find with most 1940s mysteries - it’s overly complex and littered with clues, red herrings and too many characters. The novella also climaxes with one of those scenes where all the suspects are gathered in a room together to listen to Luther’s monologue laying out the solution to the mystery as to which one is the murderer. That type of formulaic mystery may have been fresh in 1942, but I find it rather tired.

That said, if you’re looking for a solid, traditional mystery with great writing and a totally different detective leading the charge, Luther McGavock may be the PI you’ve been seeking.